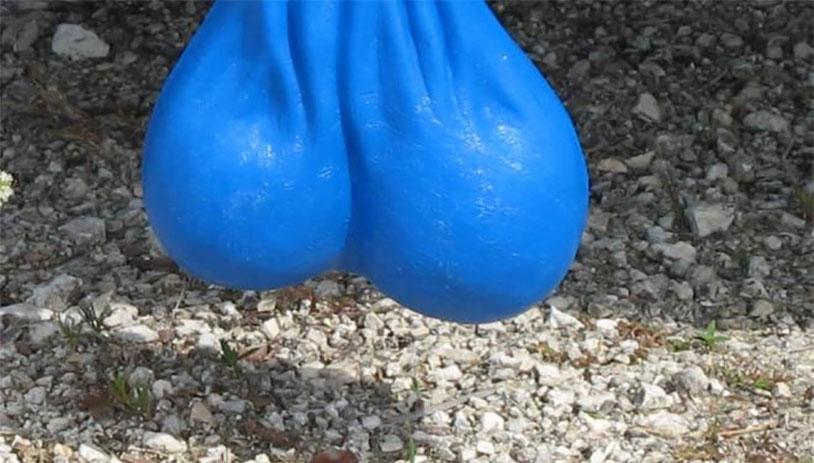 When you ask people about “blue balls,” many will tell you that it’s just an urban myth. That there are no adverse physical effects for a man if he lets the sperm back up in his boys for too long.

Those people are wrong. Blue balls, known medically as epididymal hypertension, is a very real condition. Here’s how it works. When you get aroused, blood flows from elsewhere in your body to your genitals, which become engorged. It’s not well-known that your testicles grow to 25-50% their normal size as well.

Having an orgasm sends the body a signal that your twig and berries don’t need to be heavy anymore, and they release that extra blood back out into the system. When you don’t get off, it causes vasocongestion, making your gonads feel heavy and aching. The accumulation of deoxygenated blood in the testicles can even, over time, give your ballsack a bluish hue.

So there we go: blue balls are real, and they’re terrible. But how best to describe them to unbelievers?

Online site Bustle decided to get to the root of the matter and talked to eight men of varying ages about their blue ball experiences. Here’s Steve, 27:

“The only time I ever experienced blue balls was when me and this girl I was seeing got really drunk, and she fell asleep in the middle of foreplay. I just remember letting her sleep, but walking around my friend’s house the rest of the night like I just got off of a horse I was riding through miles of rough terrain. My friends knew right away, and started calling me Sheriff Blue Balls. I think the ridicule was more frustrating than the actual feeling of it.”

“It’s like having to sneeze but you can’t. That feeling of just general disappointment and frustration, together with a tense, heavy and painful sensation. In the balls area. For some people it’s so bad that it hampers their ability to walk. With me, it’s just annoying as hell and gets me angry until I can find a way to relieve myself.”