A Ridiculously Complete History Of Madballs

The 1980s were a good time to be gross in America. Garbage Pail Kids, the sticker line created by Topps, was a nationwide hit, and toy and game manufacturers rushed to cash in on our new love for the disgusting. One of the most notable (for our purposes at least) was AmToy, a division of greeting card powerhouse American Greetings.

AmToy was interested in getting into the licensed toy market, and set up a division called Those Characters From Cleveland to merchandise ideas. They immediately struck gold with Care Bears and Holly Hobbie, targeted at the female market. But the company wanted to get the other side of the gender gap as well, and started working up concepts targeted at boys.

The initial two ideas were My Pet Monster (a shaggy Muppet-like creature) and Madballs, with the second one being the moneymaker. The grotesque balls were created by in-house designers James Elliott, Vint Gonser, Mark Spangler and Tom Kuebler at first, with others coming on down the line. The staff at AmToy was psyched to work on products that were so over the top, and it showed in the work they did.

The original concept for Madballs came when the team was kicking around ideas based on the classic game Hot Potato, where you pass around a spud until the music stops playing, and the player stuck with it is out. One sketch depicted the potato with a grotesque human face and streamers coming from it. An unofficial competition to draw the grossest face resulted in some of the original designs for the line, and when the execs saw them they realized that there was something sellable there. 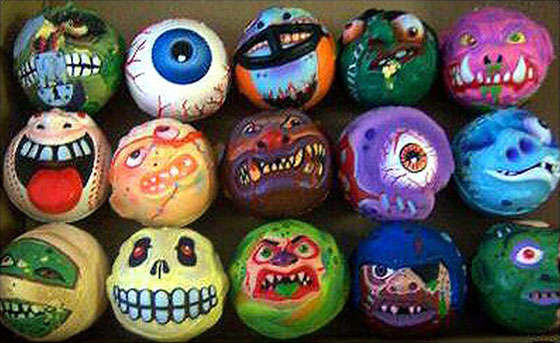 The first line hit stores in 1985 and was an immediate hit. Kids flocked to the grotesque characters, with the most popular being baseball Screamin’ Meemie, eyeball Oculus Orbis and cyclopean Horn Head. It didn’t hurt that the toys were relatively inexpensive compared to other hot products, meaning it was easier for kids to convince their parents to make an impulse buy.

AmToy got a kind of controversy they didn’t need soon after the first series of Madballs hit shelves. As kids do, they immediately started hucking them at each other, and the hard rubber that the company used to craft the toys was leading to some pretty serious bruising. With the threat of lawsuits from wounded children pending, they shifted to a softer foam material for future runs.

The other problem with the first series came from split-skulled Crack Head. While that name probably seemed fine in the offices of AmToy, once it got out onto the streets and unfavorably compared with the slang term for rock cocaine addicts, a quick renaming (to Bash Brain) was in order.

The second series featured slightly less interesting characters like Wolf Breath and Swine Sucker. The one standout was Lock Lips, who had a steel plate on his skull and a padlock holding his mouth shut. By this point, however, the profit margins for AmToy had been established, and they were big.

The most unusual items in the line were probably the Super Madballs, large-sized Nerf sports balls with a Madball twist – one for football, one for soccer and one for basketball. Theoretically, you could use these for actual sports, but they wouldn’t work too well.

AmToy also manufactured a pretty staggering amount of ancillary merchandise. Action figures with pop-off heads where the heads were miniature plastic Madballs were a big deal, but the franchise also saw pencil sharpeners, stickers, and lots of other stuff. There was even a tie-in novel written by future Goosebumps millionaire R.L. Stine! In his autobiography, Stine states that the Madballs job was the lowest-paying assignment he ever took in his professional career.

As with any fad, imitators started pouring in almost immediately. Burp Balls (which would spit out a secondary ball when squeezed), Weird Balls and Spit Balls all hit shelves with less than stellar results.

Extremely 80s candy Bonkers even had their own promotional line of Madballs ripoffs called “Ugly Balls,” advertised with one of the weirdest comic book advertisements ever. You had to send in a staggering 10 Bonkers wrappers to get one, and they’re extremely rare.

When Reagan deregulated TV advertising in the 80s, it opened the floodgates for a tsunami of toy-based cartoons to hit the airwaves. Interestingly enough, Madballs never secured a slot either on Saturday mornings or in syndication. American Greetings partnered with Canadian animation firm Nelvana to product a pair of straight-to-VHS cartoons starring the characters, though, and they’re… very bad. Incoherent, ugly and confusing, it’s not surprising that this angle didn’t take.

At the same time, Marvel Comics snapped up the license for a ten-issue series drawn by Howie Post that introduced an antagonist named Dr. Frankandbeans for the bouncing brutalities to tussle with. It was originally intended to be a three issue limited series, but sales were good enough that the company extended it.

Of course, there was also a video game for several of the leading home computers of the day. The bizarre top-down racing game produced by insanely prolific Ocean Software was hampered by its primitive graphics and didn’t really represent the franchise too well.

Many 80s toys have enjoyed continued popularity into the 21st century, but Madballs have taken some strange vectors there. The outrageous, grotesque designs have popped up in some very unusual places since their heyday.

The waves of nostalgia are cyclical, so it’s not surprising that Madballs got a revival in 2007 courtesy of boutique toy manufacturer Maximum Fun. Each new series brought back five of the original Madballs with new sculpts, joined by a new character. A second line also featured squeezable balls that would puke out guts and other gross stuff. The quality was definitely much higher than the 80s originals, and Maximum Fun brought in James Groman, one of AmToy’s designers, to spearhead the project, but they didn’t really catch the zeitgeist.

2009 saw the franchise jump to the Xbox 360 with the perplexing Madballs in … Babo: Invasion. A sequel to a Canadian game called BaboViolent 2, two of the licensed balls rolled around in a top-down shooter that got solid but unremarkable reviews. 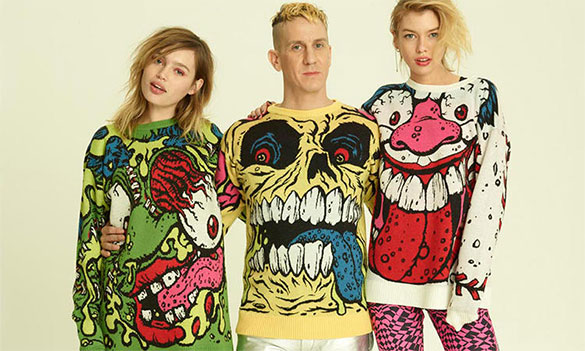 Madballs even hit the runway in 2014, when Jeremy Scott marked his debut as the creative director for Moschino with a suite of Madballs-inspired fashions. The oversized pullovers were emblazoned with the visages of some of the most iconic characters, with Scott saying he wanted to “create something wearable out of a cherished childhood icon and something seemingly so gross!”

2016 is looking to be the best year for Madballs yet. Mondo is bringing out a high-end collection of both remakes and new balls. Lion Forge is publishing a new comic series. The over-the-top gross aesthetic of Madballs is a perfect fit for the Tumblr generation, and we’d expect this unlikely franchise to continue for as long as there’s human life on the Earth.