This Artist Rolled New York Icons Up Into Balls 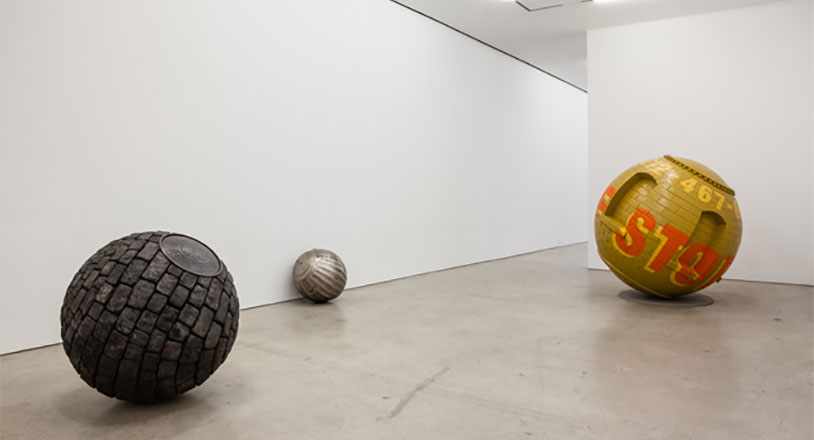 The art world is always a little perplexing to us, but we have to say we dig the new solo show from Lars Fisk at New York City’s Marlborough Chelsea gallery. In a massive white space, Fisk exhibits seven massive metal balls that take elements of the city and spherify them.

The balls vary in size – the largest is fifteen feet in diameter and represents the parking lot of the Costco in Queens, while the smallest is barely as big as a fingertip. The show’s namesake, “Mr. Softee,” imagines an iconic New York ice cream truck transformed into a rolling orb. Seeing these familiar textures reconfigured out of place is powerful and entertaining at the same time.

Fisk has been working with spherical forms since 1996, when he cast a sphere of asphalt and painted a yellow traffic line down the middle, calling it Streetball. The process was so satisfying that he turned his attention to orbs full-time, distorting the shapes we know and testing our ability to recognize them. We think they’re pretty darned cool.

The show will be up until October 15, so if you’re in New York you should stop by. Tell them the Ball Report sent you.