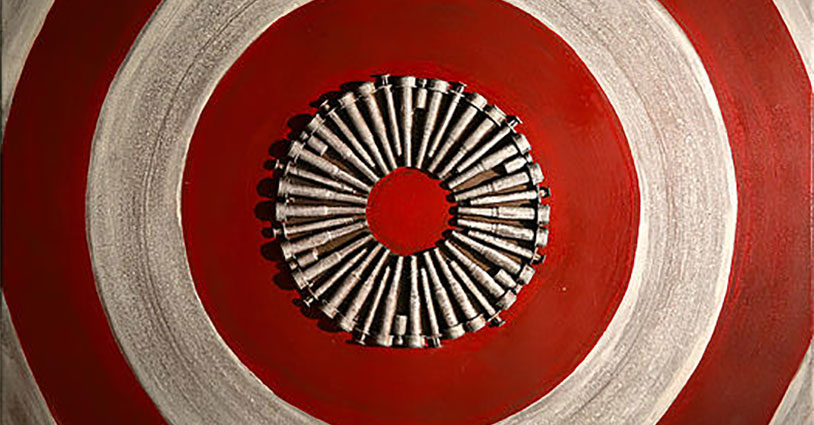 In May of last year, Canadian artist Mathieu Francoeur moved to Calgary from New Brunswick for work. While at a routine medical checkup, he received a diagnosis that would change his life: testicular cancer. Within a few days, Francoeur would move back to his hometown to get treatment.

That treatment was unusually difficult. Francoeur’s system was so weakened that he couldn’t be exposed to direct sunlight for long periods of time, work or drink alcohol. He found solace in his garage, where he started painting. His early works are stark images of trees that have lost all of their leaves, looming over blank landscapes. Francoeur also started incorporating recycled materials from his hospital stays into his canvases.

Francoeur’s artistic pursuits actually helped him in his medical care – he held his first show of paintings in October of 2014 at the Aberdeen Cultural Center, putting the proceeds from every piece sold to paying for his cancer treatment. The entire show sold out before it closed, and in even better news his cancer went into remission the day of the opening.

One thing that the artist wants to communicate is the importance of diagnosing testicular cancer early. One reason Francoeur’s treatment was so difficult was that he didn’t notice any changes in his gonads until the doctor visit. Regular self-examination and awareness of your testicles can be your first line of defense.

His latest exhibition of paintings, titled “Remission,” is on view at the Aberdeen Cultural Center. You can also visit his website here.