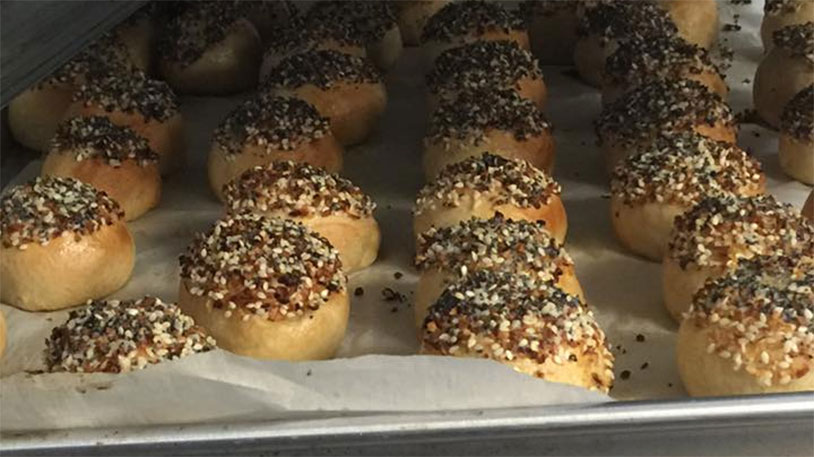 Food fads come and go – we’re at the tail end of cronuts, and pump-your-own frozen yogurt is going strong – but restaurant owners are always looking for the next big thing. If our observations are correct, it might be bagel balls.

The idea of making small hollowed-out spheres of bagel dough and hiding delectable fillings inside them probably dates back to David Chang’s groundbreaking NYC restaurant Momofuku, which introduced “bagel bombs” in 2008. They were an instant success, and perfectly illustrated Chang’s globally-influenced approach to cooking, where no cuisine is off limits. Imitators started springing up over the next few years, but the real tipping point came in 2015 when Starbucks introduced their own version.

The chain-coffee take on bagel balls, created by Shark Tank alumni Bantam Bagels, are a little sweeter and less authentic than the other versions, but they were enough to get Chang pissed off on Twitter. He’s not giving up the block, though, and the recently-opened Washington DC outpost of Momofuku proudly sells the original bagel bombs.

He’s not alone, though – earlier in 2016, a scrappy startup opened their doors with bagel balls in mind. B-Holes is the brainchild of Julia Greenberger and Grant Sarvis, who are producing high-end baked goods stuffed with things like garlic-bacon cream cheese. Wherever you choose to get them, it’s undeniable that these crusty, comforting orbs are the hot new food in town.

DCist has a big rundown on how these treats came to be, if you want more info. If you’re in the area, why not swing by these spots and do a taste test for us? We won’t reimburse you or anything, but eating balls should be a goal in itself.