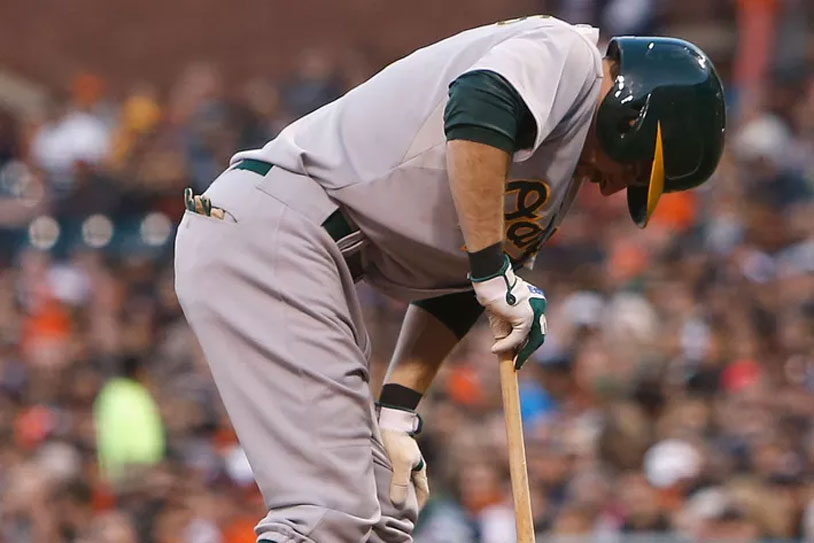 Sports can be tough on your balls. When you’re dealing with balls flying through the air at rapid speeds, every once in a while you’ll take one in the nuts. Typically, pro athletes wear cups to insulate them from the worst of it, but Oakland A’s centerfielder Billy Burns discovered on Friday that sometimes a cup just isn’t good enough.

The A’s were playing the Giants at AT&T Park with Jake Peavy on the mound. Burns took a swing at a low pitch and fouled off, but the ball took a bad bounce off of his bat and ended up popping right up into his crotch. He took it rather well, staying on his feet and just letting out a pained hop before returning to the plate to take another pitch.

Burns actually managed to complete his at-bat after the groin injury, knocking in a single that brought Sam Fuld home for the A’s first run of the game, but by the fourth inning his scrotum had begun to swell and hurt so much that he was pulled from the lineup. The Giants ended up taking it 9-3.

As for Burns, the team’s medical staff pulled him from Saturday’s game, which the Giants also won. The A’s play Los Angeles on Tuesday in Dodger Stadium, and hopefully the CF will have his balls recovered enough to help his teammates out by then.