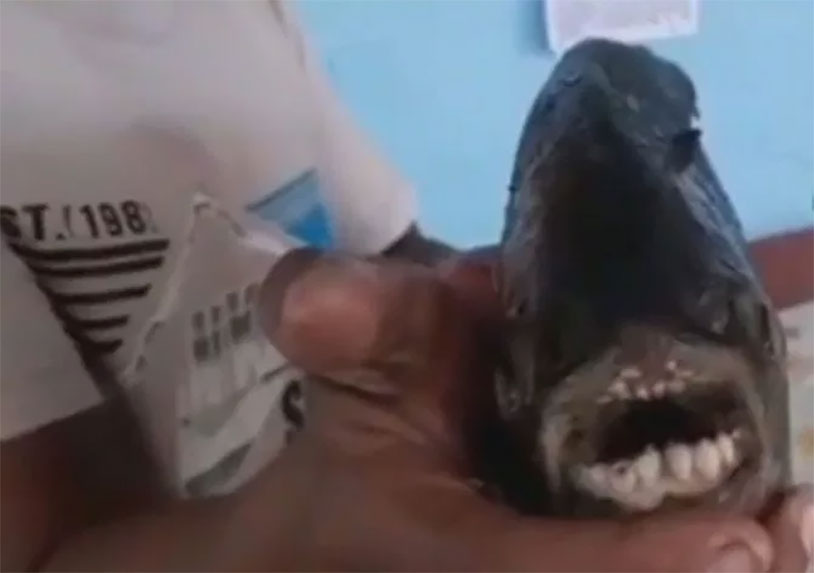 The Earth is changing in nearly uncountable ways due to the influence of human industry, as pollutants of thousands of chemical compositions get unleashed on plants and animals and affect them in some pretty intense ways. This latest story comes from Peru and introduces a terrifying creature – a fish with human-like teeth that’s been dubbed the “testicle eater.” We’re cringing already.

Caught in the village of Somate in the northern part of the country by a farmer named Jorge Chavez who was using a net in an irrigation canal to indiscriminately pull out marine life, it weighs just under 11 pounds and boasts a row of incisors that resemble a human’s on its lower jaw. Chavez immediately realized that the fish was no normal specimen and pulled it out to ask the authorities for more information.

Some people have speculated that the fish could be related to the pacu, a South American species that also features large, protruding teeth, but we don’t have confirmation on that theory. Pacu have been found as far abroad as New Jersey, so it wouldn’t be tremendously surprising to hear of one in an irrigation canal.

So far, the terrifying testicle eater fish hasn’t been spotted anywhere but Peru, but who knows – if those big choppers lend it an evolutionary advantage, it could spread worldwide. We smell a hit horror film waiting to happen.