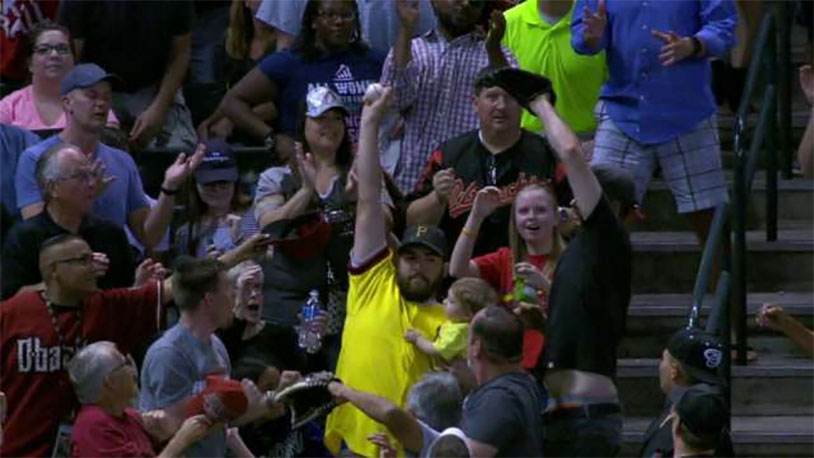 Baseball season is here, and that means unbelievable catches are the order of the day. We’ve already covered a couple amazing foul ball catches since the start of the season, but here’s a home run ball that’s something else.

When you’re at a baseball game, it’s rare to have both hands free to snag a ball when it comes into the stands. You’ve got a beer, or a hot dog, or some peanuts, or your phone, or a baby. Well, maybe not a baby very often, but it does happen. Meet

It went down at Friday’s game between the Arizona Diamondbacks and the Pittsburgh Pirates at Chase Field. In the fourth inning, Welington Castillo banged a homer out into the stands. It was a beautiful hit, and the ball camera tracked it as it arced perfectly into the outstretched right arm of Justin Kirkpatrick. Easily spotted from his bright yellow Pirates jersey, Kirkpatrick’s other arm was occupied – holding his infant son.

The utter cool with which this fan snagged his home run catch is something to aspire to. Surrounded by a crowd of people, all of whom would have been happy to grab that homer, Kirkpatrick reached out like a boss and picked it out of the air.

Here’s a video if you want to experience the moment for yourself.

MLB.com has an interview with Kirkpatrick, and is speculating that this might be an early contender for Fan Catch Of The Year.