Bucky Balls Will Still Kill You If You Let Them

Do you remember “Bucky Balls”? No, it’s not a pair of gonads from the Marvel Cinematic Universe. And it’s not the science thing, either. Or maybe it kind of is a science thing, but not that exact one. We’re talking about the little magnet toys that were everywhere for a while a few years ago, before they were suddenly gone from every internet warehouse and airport gift shop overnight.

That’s because they’re deadly as hell!

There are surely more relaxing videos for you to watch if you’re into brain tingles—ones that don’t even include things that threatened a bunch of kids’ lives. Come on! You don’t wanna be like the schmuck that made these things, right?

The CPSC’s argument is that warnings don’t work. If that’s the case, then we need to think of all of the current products on the market that are intended for adults that come with warning labels. Laundry detergent pods, adult-sized ATVs, balloons…

Even if you’re just whispering, this is pretty tone deaf: 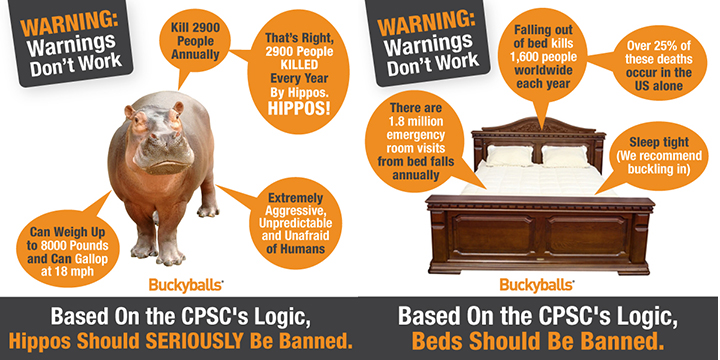 Hippos should probably be banned, though.