Can Anybody Get Us Some Of This Balls Candy? 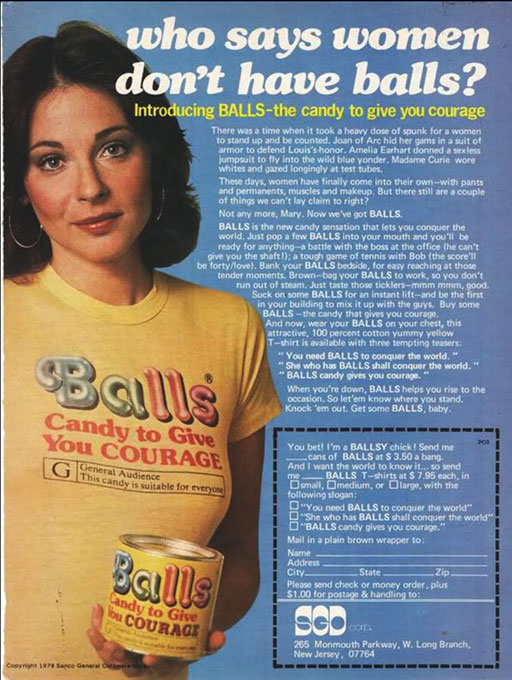 We were idly browsing Twitter yesterday when this vintage advertisement popped up in the timeline and wow, do we have questions. Apparently it’s for a long-forgotten brand of sweet treats called Balls, “The Candy That Gives You Courage.” Balls candy is a new one on us, and we’re some of the greatest scholars of round things the world has ever known, so we went on a historical deep dive to learn more.

The ad copy is pretty glorious: “BALLS is the new candy sensation that lets you conquer the world. Just pop a few BALLS in your mouth and you’ll be ready for everything – a battle with the boss at the office (he can’t give you the shaft)” is just a start to the double entendres. Apparently the joke here is if a lady has BALLS in her mouth she won’t have to suck on the other thing?

I dug into the identity of the BALLS candy manufacturer, SGD Corp of Long Beach, NJ. The SGD abbreviation is now used by renewable energy company SunEdison, and the street address on Monmouth Parkway now appears to be an apartment building. Was BALLS their last shot at success, and when they failed to catch on the firm was driven out of business? Absent any surviving executives, we may never know. We’ll pay cash money if you can find us one of those shirts in our size, though.