Can This Guy Beat The Rubber Band Ball World Record? 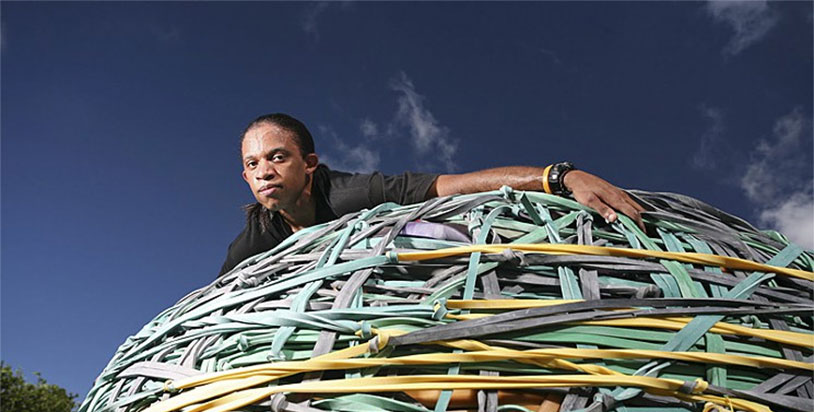 The world of world records is a cutthroat one, with dedicated – some might say obsessed – people pushing their limits to get in the Guinness Book. One of the most coveted records on the planet is the largest rubber band ball. We think people fixate on it because it seems easy enough to accomplish. Just get a bunch of office supplies and go to town. But the actual process of building a record-setting ball is something entirely different.

The Broward Palm Beach New Times has an in-depth story on Joel Waul, who set the last record in 2008, and Will Love – the latest pretender to the rubber band ball throne. Waul built his massive orb over the course of five years. It boasts a diameter of 26 feet and weighs 9,032 pounds. After being certified by Guinness it was moved to the Ripley’s Believe It or Not! Museum in Orlando.

Love’s ball looks a little skimpy in comparison. Dubbed “Rubberto,” at press time it was a measly 50 pounds. But with the aid of sponsor Alliance Rubber Company, Love wants to make a rubber band ball that will shatter all known records and come in at a weight of 20,000 pounds – more than double the current record holder. He also thinks it’ll take him only two years to get it done.

Joel Waul, however, isn’t taking this challenge lying down. On Facebook, he informed his fans that he’s also going to start working on a new rubber band ball of his own. Whether this is a direct response to Love’s challenge or just the perpetual human need to push the envelope, our money’s on the guy who’s already done it. Waul closed his post with the warning that “they will know who the true rubber band man is.” Until Love beats 9,032 pounds, that title isn’t even in doubt.