We Can’t Deal With Ed Balls Dressed As The Mask 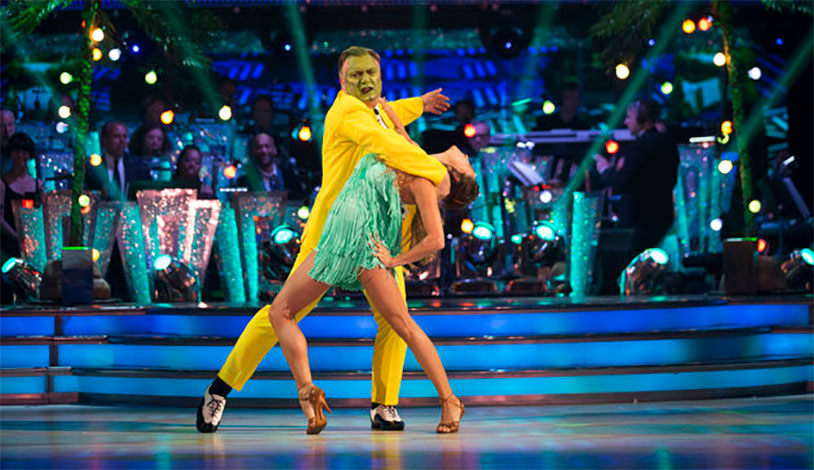 To catch you up: Ed Balls is the former British member of Parliament who has left politics for a career as a college professor and author. We write about him on this site because his last name is Balls and this is the Ball Report. Recently, Ed has increased his public profile dramatically by appearing on Strictly Come Dancing, which is sort of the British version of Dancing With The Stars. We wrote a little bit about Ed’s first go on the dance floor and figured he’d be eliminated pretty rapidly and uneventfully and we wouldn’t have to cover it again.

Whooo boy, were we wrong. Check out that top picture. That’s Ed Balls made up like Jim Carrey’s character from the 1994 comic book adaptation The Mask. In it, the lead character finds a magical mask that basically turns him into a cartoon character, capable of crazy feats and virtually indestructible. The theme of this week on Strictly was Movies, and they sure picked a doozy for Ed.

Along with partner Katya Jones, Balls mugged his way through the famous “Cuban Pete” dance number from the movie (which featured Cameron Diaz in that role). The dance, like all of his others, got low marks from the judges, but we can’t help but applaud the absolute insanity that went into this performance. It needs to be seen to be believed.

Huffington Post UK has even more on Ed’s star turn, if you need it.