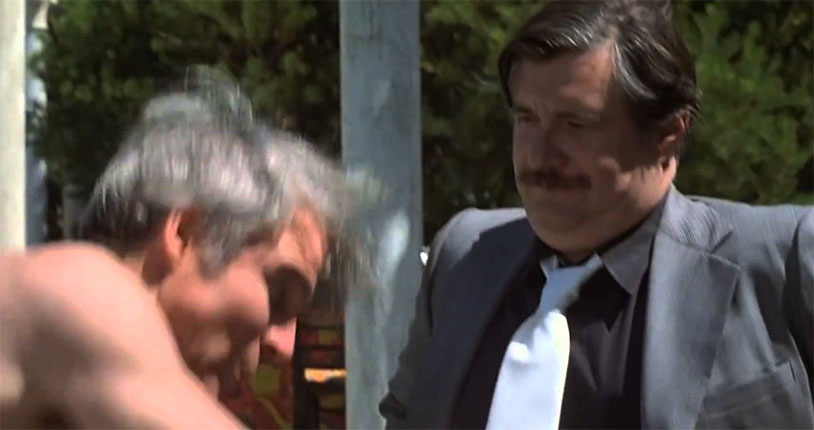 One of our favorite films of all time is The Jerk, the Steve Martin vehicle that casts him as a poor Black child (don’t ask, just watch it) who travels off to find his special purpose and encounters all kinds of catastrophe on the way. One of the best bits comes when Martin has to fend off a group of Mafia types using his newfound karate skills. He handles most of them with ease but comes to a halt after a groin kick goes awry courtesy of a thug named Iron Balls McGinty. You’d think that McGinty was just some background player, but we did some research and found he’s actually a fascinating dude. Come with us as we meet Carl Gottlieb, the man behind the iron balls.

Let’s start of with Gottlieb’s scene from The Jerk:

Born in New York City, Carl Gottlieb attended Syracuse University where he studied drama. After graduating, he relocated to San Francisco, which had a booming experimental comedy scene in the 60s and 70s. With improv group The Committee, he met some of the biggest stars and started writing for the Smothers Brothers and a few sitcoms.

His first role in a major film came as “Ugly John” in Robert Altman’s M*A*S*H, but 1974 saw his career take a very different turn. Gottlieb was brought in to co-write the script for Steven Spielberg’s thriller Jaws, and the producers credit his pen with some of the film’s most notable scenes. He also played a minor role on-screen in the film as well. More films followed, with Iron Balls McGinty in 1979. His last screen appearance of note was in 1995’s Clueless.

Gottlieb also served on the board of the Writer’s Guild of America for several decades starting in 1983. Not too bad for a guy who got famous for playing an indestructible scrotum.