Check Out This Pair Of Balls At The South Pole 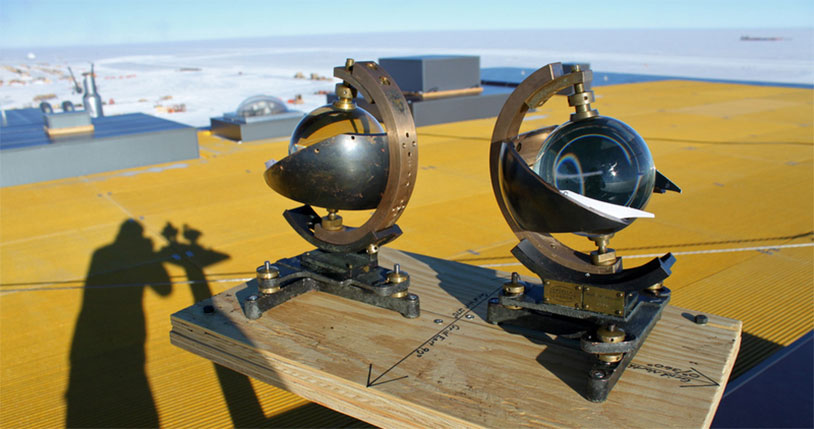 Meteorologists study many different aspects of the Earth’s atmosphere, from the movement of clouds to the total amount of sunlight the planet receives. One of the ways we measure that last one? A pair of crystal balls on a podium at the South Pole.

Atlas Obscura has a fascinating little article on the Campbell-Stokes sunshine recorders that scientists have been using at the South Pole for years. Mounted on the roof of the Amundsen-Scott Research Station, these two crystal balls work in a fascinating way to record how much sunlight hits the southernmost point on the planet.

Sunshine recorders were invented by John Francis Campbell, a Scottish writer who was obsessed with quantifying sunlight like we do rainfall. He was interested in optics, and recognized that he could use a transparent sphere to focus the sun’s rays on a wooden bowl. As the sun moved across the sky, the focused solar energy would carve a groove in the bowl – much like you’d use a magnifying glass to fry ants as a troubled kid.

Later in the century, mathematician Sir George Gabriel Stokes came up with a modification to the system – instead of using expensive wooden bowls, he developed removable cards that could be swapped out every day and compared to each other. The device came to be known as the Campbell-Stokes recorder in honor of both men.

Even though it’s more than a century later, these primitive devices are still in use around the world. The South Pole is one of the most fascinating places to use one, as a full 6 months of the year are spent in complete darkness. For the other half, though, the sun is in the sky at all times, and being able to track its movements can help scientists understand a lot about the way it impacts the environment.

Just another way a pair of balls are helping advance human knowledge.