Are Cricket Cheese Balls The Future Of Snacking? 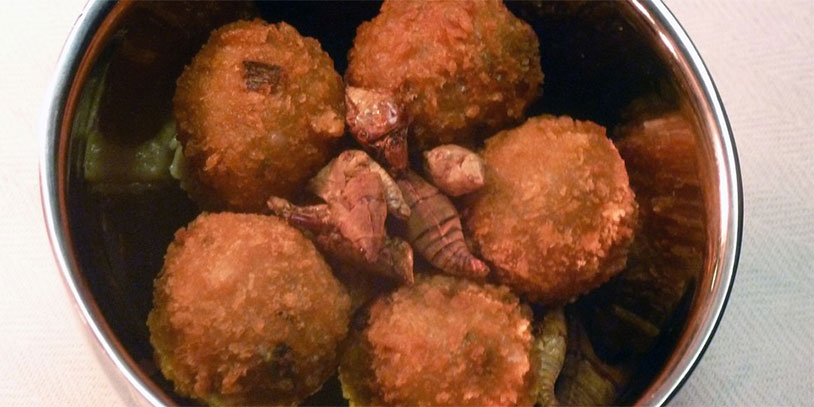 Many cultures around the world eat insects. They’re a good source of protein, easy to farm, and actually taste pretty decent if prepared properly. But one Mexican chef believes that his cricket cheese balls might be so good they bring bug-eating to the mainstream.

Munchies has an interview with Omar Romero Quezada, who is currently the mind behind super-hot London restaurant KOJAWAN. The menu there is pan-Asian in the strictest sense, drawing inspiration from Korea, Japan and Taiwan to create food that’s totally unique. And yes, there’s bugs on the appetizer menu.

The cricket cheese balls aren’t presented like a novelty item, a gross-out challenge that bros can order to impress their dates. They’re just another excellent dish you can order at KOJAWAN. That’s because eating bugs isn’t a big deal to Quezada. Growing up in Mexico, he was lucky enough to chow down on escamoles, jumiles and other delicious insect dishes. When he put together his new menu, he wanted to share some of the satisfaction of those ingredients with a totally new audience.

There are actually three kinds of crickets used to cook the appetizer – the base is a choux pastry made with cricket flour, and Thai crickets are mixed in. The balls are flavored with jalapenos, dashi powder and Parmesan cheese. Then they’re coated in panko breadcrumbs and fried for two to three minutes. After the balls are plated and fried, larger Mexican crickets are added as an edible garnish.

The bug balls are the first of several insect-oriented entrees that Quezada hopes to roll out to his customers. With protein prices rising, it only makes sense to look for alternate sources. And if they taste this good, we can see bug-eating becoming a pretty big deal in the world of cuisine.