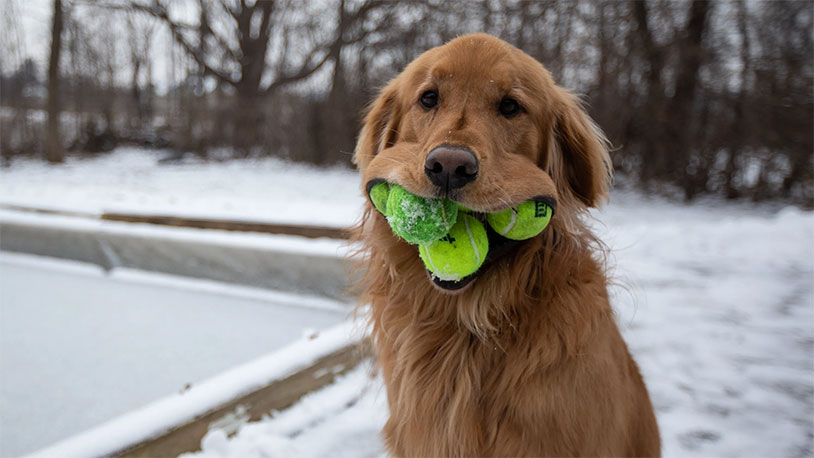 We’ve written about human beings smashing a ball-related Guinness World Record before, but this is the first one we’ve ever seen by a dog. Finley, a Golden Retriever from Ontario County, New York, can carry six full-sized tennis balls around in his mouth at the same time – more than the organization has ever counted from any other canine. Big ups, Finley!

Finley’s owners began noticing that their hound had a talent for toting tennis balls when the dog was two. He started with four balls in his mush and quickly learned how to use his paws to wedge two more in. They have no idea exactly why he enjoys putting balls in his mouth so much, but it was good enough to bring a world record back to the family.

Guinness has very strict rules for submitting and recording a world record, and Finley’s owners have been working to get his accomplishment recognized for a few months now. The previous record holder, a golden retriever from Texas, set the limit at five in 2003 and it has stood ever since. It was obvious that Finley was the man to beat it.

Big news to share😍— our local paper decided to write an article on a good boy(aka me) and I was SUCH a good boy that I carried 6 tennis balls and my new friend Georgie got it on camera!! @guinnessworldrecords I’m coming for you very VERY soon! My story is below • • •Photo cred— my new friend Georgie♥️ • https://www.democratandchronicle.com/story/news/2020/02/05/finley-molloy-six-tennis-balls-guinness-world-record-canandaigua-ny/4623658002/ • • • #goldenretriever #retriever #retrieverpuppies #dogsofinstagram #doggo #puppylove #golden #goldenlovers #dogstagram #followme #goldenretrieverpuppy #goldenboy #goodboy #tennis #dogsofinstaworld #cuteboy #picoftheday #wintertime #worldrecord #guinessworldrecord #dogsofinsta #goldensofig #goldensofinsta #iggoldens #retriever #retrieverig #retrieversgram #animalsinfluence #like

His owners never force the dog to do his trick – he just loves tennis balls that much, and will gleefully sneak into the neighbor’s garage to swipe some.