Fan Hospitalized After Getting Beaned By Foul Ball 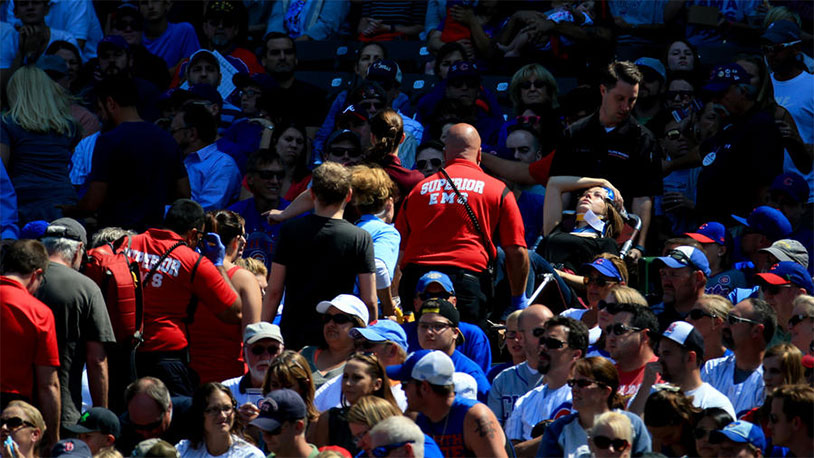 It’s a hard life in the stands, as an unlucky fan found out on Sunday during a Cubs / Braves game at Wrigley Field. In the first inning, Cubs rookie Kyle Schwarber hit a line drive foul down the first base side and it smashed right into the noggin of a female spectator in the stands. It was obvious to everybody on the field that this was a bad hit, with Cubs first base coach Brandon Hyde holding his hands to his helmet in sympathetic pain. EMTs were dispatched to the scene and the woman was stretchered out and taken to a nearby hospital, where she is expected to recover.

Foul balls winging into the stands has been a concern for the MLB recently. Just a few days ago, a fan got pegged by a foul in Detroit and injured. Several pro players are advocating for safety netting to be installed over the seats behind the plate. We’re of two minds on this – on one hand, safety is always good and we don’t want more people to get hurt. On the other, catching a foul that dings into the seats is one of the purest pleasures of baseball as a fan.

There’s a real difference, though, between getting under a pop that goes past the outfield wall and reacting to an off-angled hit behind the plate. When a pitch hits a ball badly, it can break in unpredictable directions, and you’ve only got a few seconds to react to it. As we’re seeing, many baseball fans don’t have that kind of reaction time.

What do you think? Should MLB put more safety netting around the stands, or do fans need to be more aware?