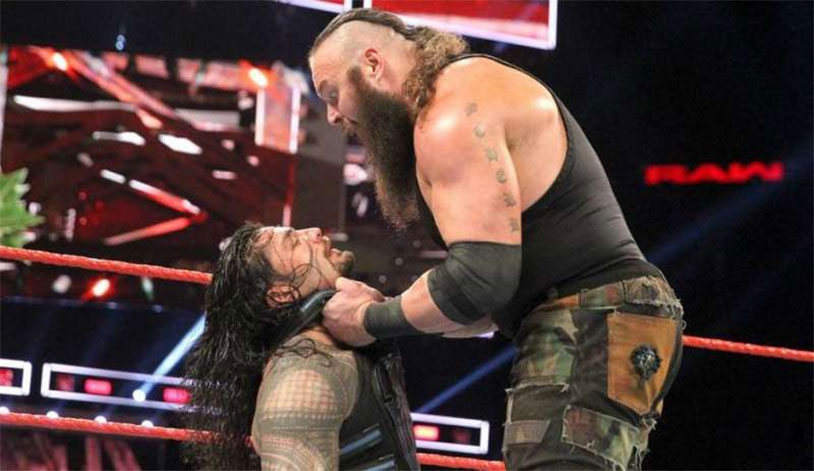 We don’t typically do this kind of thing for WWE pay-per-view events here at the Ball Report, but the fact that they named their July Raw brand show Great Balls Of Fire means that we have to give them props. If you’re watching the show either on your cable provider or on the WWE Network this Sunday, here are our picks for the winners and losers.

The Cruiserweight Championship is on the line in this bout. Neville has dominated the division in the last year and although Tozawa is one of the few contenders who gets any crowd reaction, we still don’t think it’s time for the King to lose his crown. Pick: Neville.

It’s tragic when a friendship ends, but the pairing of Enzo and Big Cass wasn’t doing either man any favors in the tag division. WWE always loves a giant, and we’d expect to see Amore do what he does best – take a hellacious beating – to get his former partner over as a dangerous man. Pick: Big Cass.

The Miz vs. Dean Ambrose

The Miz puts his Intercontinental Championship up against frequent foil Dean Ambrose. Expect lots of shenanigans from the Miztourage but no title change here – Ambrose doesn’t need the belt and has better things to do and Miz can elevate any face in the company with his sterling mic skills. Pick: The Miz.

Sheamus and Cesaro vs. the Hardy Boyz

This rematch for the tag team titles will be contended under Iron Man rules – whichever team gets the most pinfalls or submissions in a 30 minute time period is the victor. The Hardyz don’t need the belts to be over with the crowd, and the stipulation benefits the slow-paced style of Sheamus and Cesaro over the high-risk stuff. Pick: Shesaro.

Bray Wyatt never wins when it counts, so the question is simple: does Great Balls Of Fire count? Rollins is one of the company’s most visible faces, coming off injury with a very hot run. Bray doesn’t have his Family behind him anymore and was responsible for two of WWE’s worst matches in recent history against Randy Orton. Pick: Seth Rollins.

Bliss defends her WWE Women’s Championship against former title-holder Banks in what should be a fun match with lots of emotion. At this point Bliss is the best talker the division has and should probably hold on to her belt a little longer, but Banks needs something to keep up her momentum and the company has shown its willingness to switch it up. Pick: Alexa Bliss.

This ambulance match sees the company’s golden boy Roman Reigns against the monster Braun Strowman. Strowman has come out on top in most of their confrontations so far, but WWE has bet heavy on Reigns and want to make him look strong heading into SummerSlam – he did retire the Undertaker, after all. Pick: Roman Reigns.

Part-timer Lesnar has a death grip on the WWE Universal Championship, for better or worse. The build to this match has made Joe look like a real threat – which he is – but the company obviously wants Brock losing the belt to be a Big Event, and they won’t have it happen here. Pick: Brock Lesnar.