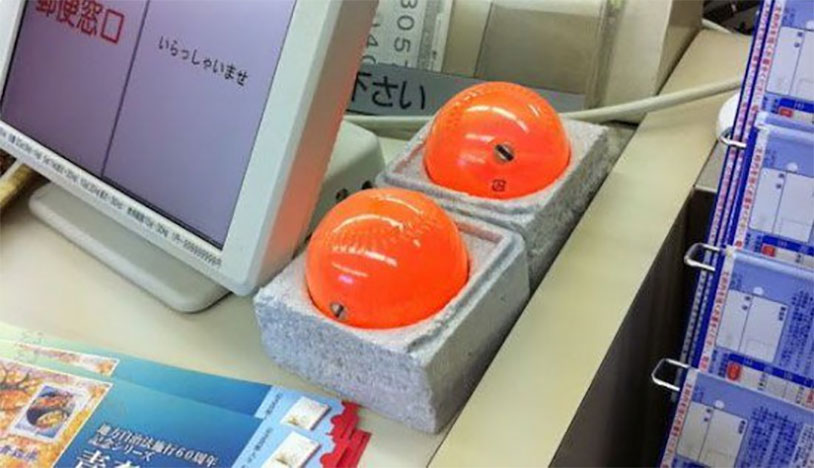 Even though Japan has a relatively low crime rate compared to many other Eastern nations, there are still scofflaws and ne’er-do-wells prowling the streets and robbing their convenience stores. And since gun laws are much stricter there, you can’t keep a .45 under the counter to scare thugs off. What’s the solution? For some stores, it’s orange balls full of dye.

The tennis ball-sized orbs are called bohan yo kara boru, which roughly translates as “anti-crime balls.” They’re filled with a dye and explode on impact, so when the robber is making their getaway the idea is to huck a ball or two at them so the police will have an easier time hunting them down. The manufacturer recommends that users aim at the feet, as the 10 foot splash radius will easily get on them.

The balls actually have a pretty fascinating history. Around 20 years ago, toll booth operators in Japan used to throw eggs at the cars of drivers who went through without paying. When concerns about wasting food were raised, an unknown inventor offered up his pigment-filled balls instead. Since then, they’ve spread to several other areas of Japanese society, including hotels and banks.

Whether they’re actually effective or not is another matter. One study revealed that color balls were only thrown in a measly 3% of all convenience store robberies, which makes them seem like they’re hardly worth the shelf space. But considering the pigment hardens after just a few years, companies are still buying them despite that. At this point, they seem like just a part of the country’s cultural landscape.

The Japan Times has a full story, with even more background detail on the anti-crime balls. What do you think? Would orange balls work here, or would enraged crooks just pop caps at the people behind the counter?