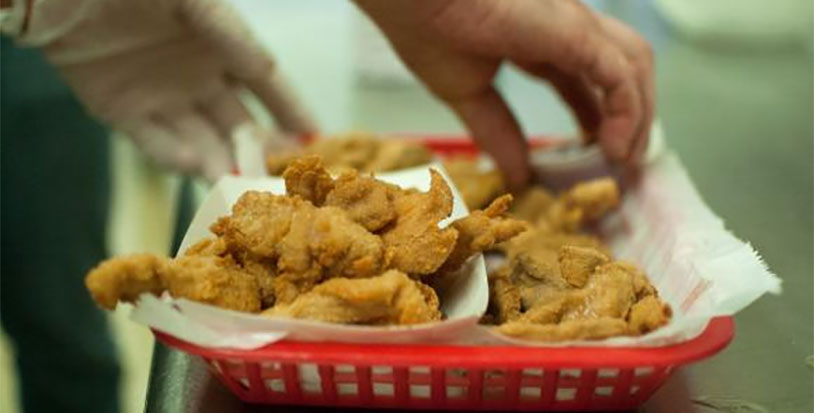 We’ve written about eating bull balls – also known as Rocky Mountain oysters – a few times on this site. But it’s mostly been in the context of special events, like the festival in Croatia that gathers chefs from all over Europe to make their best testicle-based dishes. But for many people in the heartland of America, the testicle is just another cut of meat, often served deep-fried as fast food. A fascinating article at Harvest Public Media examines just how ingrained these things are in the local cuisine of Colorado.

“They’re known by many names: lamb fries, bull fries, Montana tenders, huevos de toro, cowboy caviar.” However you slice it, the preparation is the same. The writer travels to Bruce’s Bar in Severance, Colorado to try the iconic rocky mountain oysters. The joint has been preparing the dish since 1957, and they’re justly famous for them. The balls are diced, breaded and then deep-fried. In addition to beef, Bruce’s serves bison and lamb “oysters” as well.

The reporter describes the taste and texture in detail – juicy, rich and totally unique. They sound pretty damn appetizing, especially the beef.

Have you ever eaten Rocky Mountain oysters? We’re not 100% sold on them, but we didn’t think they were all that bad. Maybe we’ll make a pilgrimage to Bruce’s to try theirs.