Let’s Get Into Country Balls 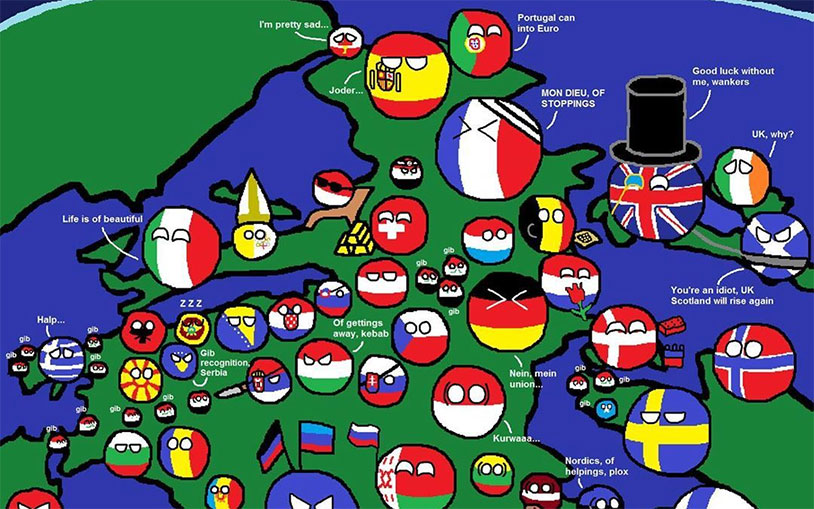 The Internet is full of so many odd little subcultures and memes that it would take a team of dedicated researchers 40 hour weeks to catalogue and explain them all. As the year comes to a close, let’s shine a spotlight on one of the stranger ones – country balls. These badly-drawn circles decorated with the color patterns of flags of the world’s nations and cartoonish eyes have become a major visual shorthand in some corners of the Web. But how did they come to be?

The country balls started off at a site called drawball.com, which is an “oekaki,” a typically Java-based system that lets users sketch and save images. Drawball featured a massive circular frame shared with all users, who could draw over others works. During 2009, a loosely-organized group of Polish users decided to wage war on the service by drawing the Polish flag large enough to occupy the whole canvas. They were successful, and the image was soon adopted by the Krautchan imageboard with Polandball becoming an anthropomorphic character. The red and white orb typically served as the butt of jokes.

Soon afterwards, other country balls began to be introduced into the ecosystem in the form of myriad MS Paint-drawn cartoons. They often portrayed Russia as the big brother to Poland, constantly putting the neighboring country down. Other stereotypes came into play with these countries – USBall is overweight and loves guns, while France totes a white flag. Over the last decade, tens of thousands of country ball comics have been made, which you can see here.