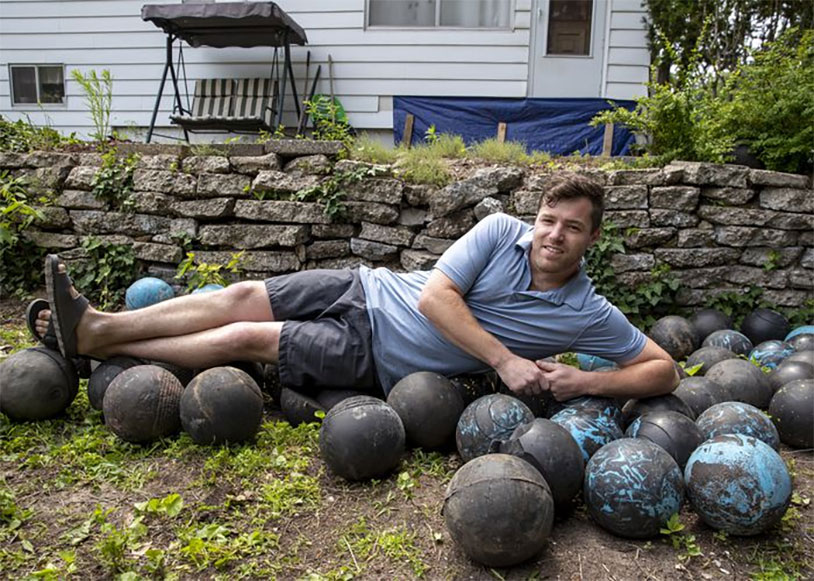 The Earth hides many mysteries, but this one is pretty ridiculous. A homeowner in Muskegon, Michigan was doing a yard improvement project on his house when he discovered a cache of 158 Brunswick bowling balls buried beneath the soil.

David Olson decided to tear out the concrete pad and cement steps on his home in Norton Shores, looking to revamp the house’s back landing. But when he got to the dirt beneath, he discovered a bizarre cache of balls buried there. The Brunswick balls were deposited in his lawn un-drilled, meaning that they had no holes but were emblazoned with the brand’s logo. Brunswick produced bowling balls in Muskegon starting in 1906 and continued to do so for nearly a century until moving their factory to Mexico.

Olson, who bought the house two years ago, theorized that one of the previous owners must have acquired the balls as filler. Brunswick employees were allowed to take items that didn’t pass quality control, and thrift stores in the area have seen footstools with bowling pin legs and other creations. The balls were a cost-effective way to shore up and stabilize the earth under the steps.

Olson, whose grandfather worked at the Brunswick factory, plans to keep some of the buried balls as decorative edging in his yard. Others will be donated.