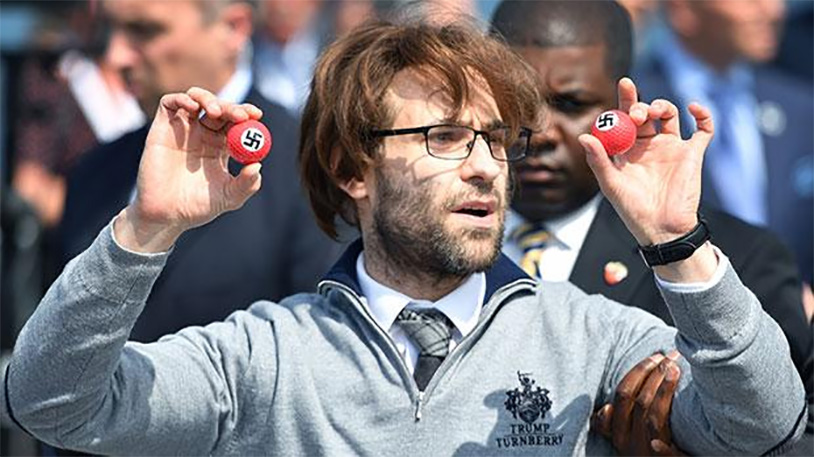 Last week was a pretty tough one for Europe, with Britain voting to leave the European Union and kicking off a free-fall of the financial markets as companies try to figure out what to do next. That didn’t seem to make an impact on Republican Presidential nominee Donald Trump, who traveled to Scotland to promote his golf courses and ended up with a face full of Nazi balls.

When Trump showed up to make a speech at his money-losing Turnberry golf course, British comedian Lee Nelson had beaten him there. Wearing a pullover with “Trump Turnberry” emblazoned on it, Nelson made an announcement that he was there to distribute a new style of golf balls that the course would be using, and then started handing them out to the assembled crowd.

The bright red balls were extremely eye-catching, but when Trump’s people noticed that they were emblazoned with swastikas, the traditional symbol of the Nazi government, the crap hit the fan. Trump bellowed at his security guards to eject Nelson, but by that time the damage had already been done and he had to give his remarks in front of a lawn dappled with Nazi balls.

Time has the story, which also goes into some of Nelson’s previous public relations pranks including throwing money at beleaguered FIFA head Sepp Blatter. We’d expect this prank balls to become collector’s items, even if Trump doesn’t win.