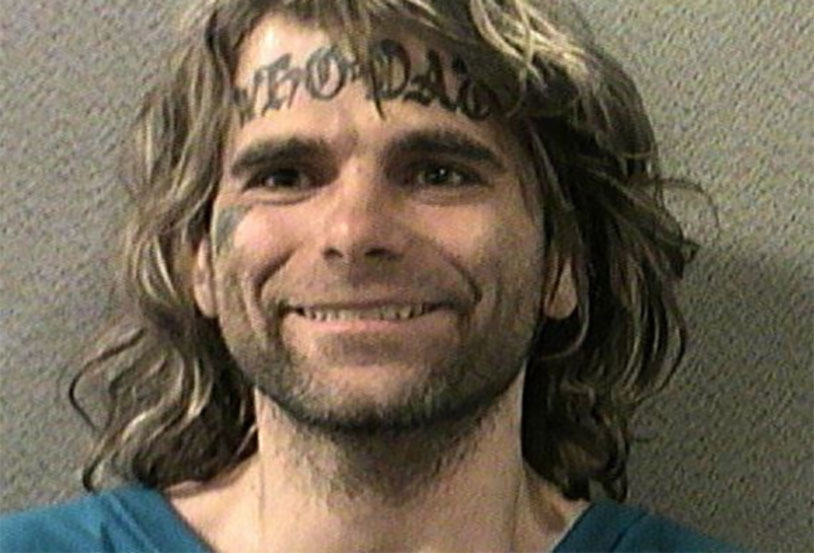 There’s a certain social status that comes with getting a forehead tattoo, and it’s not generally a good one. Michael Edwards is obviously a massive fan of the New Orleans Saints, because he has the team’s “Who Dat” motto permanently inked on his dome in huge Tupac-scale Gothic lettering. I guess in the Big Easy you can still find gainful employment even with intense body art, but Edwards doesn’t seem to be doing that, either: he’s currently an inmate of the Metairie Parish Prison on undisclosed misdemeanor charges.

But that’s neither here nor there, as the reason for this write-up is what Edwards can’t stop doing while behind bars: grabbing the crotches of correctional officers. Nola.com has a report on his shenanigans in prison. Apparently when he was handcuffed and awaiting transfer on August 3rd, he suddenly lunged forward towards an officer’s groin and grabbed his testes. There’s no injury report, so we assume that the officer made it away from the demented prisoner’s clutch safely.

Edwards wasn’t done, however. On Tuesday, August 4th, when he was riding in a transport van, the groper with the forehead tattoo once again became aggressive. Edwards was wildly swinging a metal stool inside the vehicle and had to be subdued with an irritant foam to the face. He was brought in to a medical facility for decontamination and while there went for another deputy’s testicles, getting them in such a grip that his hand had to be pried off by other officers.

Michael Edwards is now facing additional charges of sexual battery and battery of a police officer, with bail set at $30,000. Let that be a lesson to you: forehead tattoos don’t lead anywhere but a prison cell and an insulting story on The Ball Report. Keep it covered by your sleeves, kids.