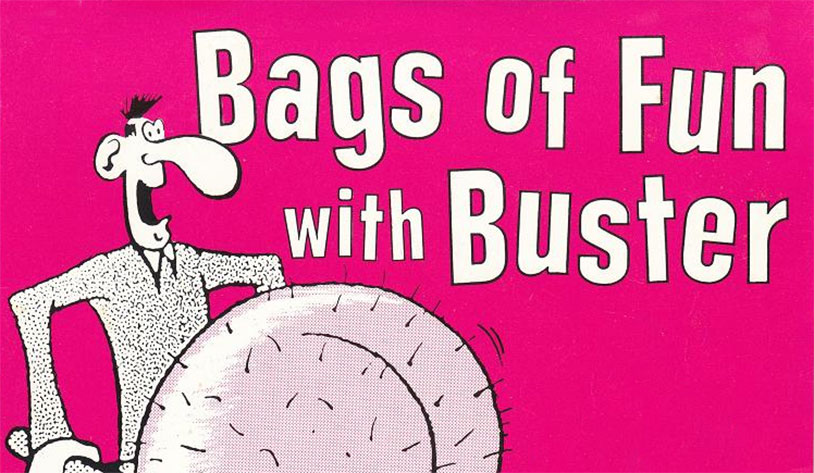 Over here in the states, we’ve depended on Mad Magazine to deliver the satirical comics and parodies that warped a generation of young minds. In England, they have the Beano and Viz to do the same. Out of the pages of the latter came a character very relevant to our interests – Buster Gonad, the “boy with unfeasibly large testicles.”

After a mysterious cosmic ray strikes him square in the nutsack, Buster’s balls inflate to a size so large that he has to tote them around in a wheelbarrow. His adventures typically revolve around his huge nuts getting him in some sort of trouble, or alternately being used for things that no normal man’s balls could.

Since his introduction in 1987, Buster Gonad has become one of Viz’s most popular and enduring characters. The year of his debut also saw him release a novelty 7 inch single entitled Bags of Fun With Buster, recorded by the group “Johnny Japes and His Jesticles” (actually two members of legendary pop group XTC).

Buster even made an appearance in Viz: The Game, starring in a segment where players had to flatten pizza dough using his enormous balls.

Next year will mark the 20th anniversary of Buster Gonad’s creation. We’re not sure if Viz is going to do anything to commemorate their huge-balled hero, but Buster’s influence on pop culture is undeniable. He’s been namedropped in the British Medical Journal, had his image painted on the nose of a Royal Air Force bomber, and was called a “household name” by the BBC. Not too bad for a dude with a hyper-sized scrotum.

Read an archive of Buster strips at Viz.com