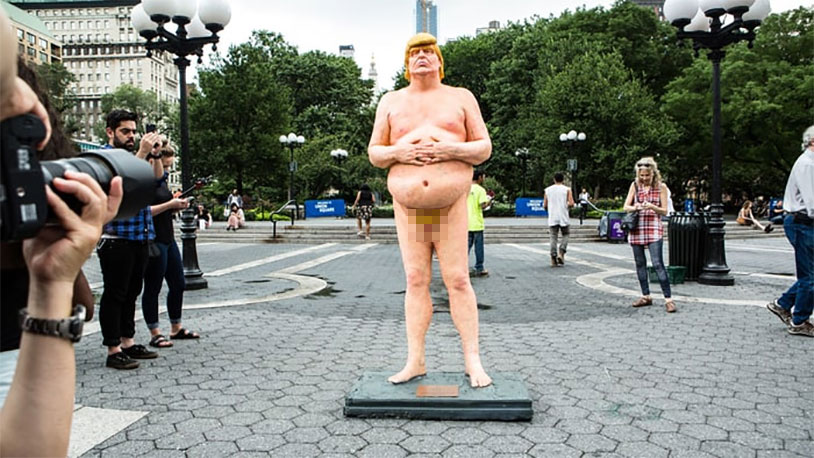 We’re not a political site, so The Ball Report will be keeping our opinions on the Presidential race between Donald Trump and Hillary Clinton to ourselves. But when a guerrilla artist’s collective releases a project called “The Emperor Has No Balls,” we’re bound by law to cover it.

Seattle, New York, San Francisco, Cleveland and Los Angeles all saw simultaneous erections of hideous nude statues of the real estate developer turned Presidential hopeful. The massive, six foot tall artworks depicted a caricatured Donald Trump, bloated belly hanging over a microscopic penis with, yes, no balls. The statues saw different fates. New York’s was taken down almost immediately, with the Parks Department issuing a statement that they stand “firmly against any unpermitted erection in city parks, no matter how small.” The ones in Seattle and San Francisco are still up as of press time.

The statues were the work of “anarchist collective” Indecline, who first came to public attention 15 years ago with “Bumfights,” a series of videotapes that featured homeless men fistfighting for paltry amounts of cash. Since then, they’ve gone on to reinvent themselves as an arts-focused group that puts up murals and other public works to comment on the events of the day. And that’s what brought them to collaborate with a Las Vegas-based artist for five intensely grotesque naked Trump statues.

There are definitely some issues to the project – the implication that having a grotesque body and a tiny dick automatically makes you a bad person has many people speaking out. But the artists responsible say that they would like to do the same thing with Hillary Clinton, and might just do it before the election is over.

Rolling Stone has a long piece on the artworks, as well as an interview with Indecline. It’s well worth reading.