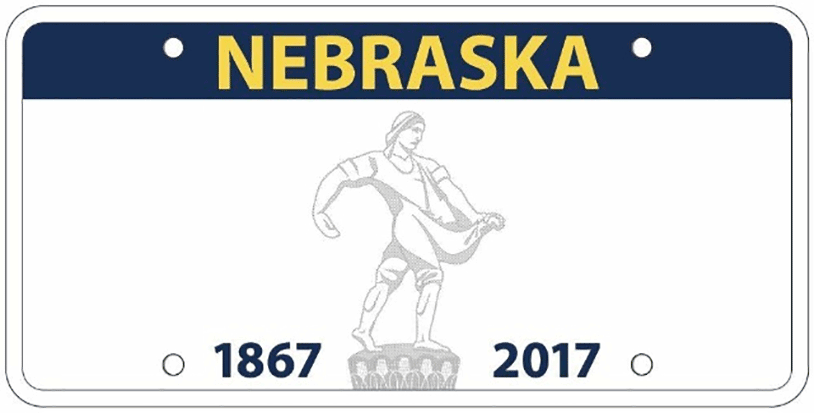 We’re not going to say we were planning to move to Nebraska, but after this latest fiasco we’re planning it even less.

Commemorative license plates are a decent moneymaker for states – by paying a little extra, you can opt to have a picture or message on your car that reflects your special interests. Lots of states do it, and Nebraska is no different. 2017 was set to see the debut of the Nebraska Sower plate, featuring one of the state’s iconic symbols.

The Sower, if you’re not familiar, is a statue that stands atop the state capitol building. It depicts a humble farmer scattering seeds on the ground from a waist-mounted satchel. The thing is, if you look at it just right, it doesn’t look like a satchel as much as it looks like an enormous scrotum. And the license plate art by Jeff Heldt makes things worse.

According to Yahoo News, Heldt accidentally used a fresco of the Sower from Michigan State University instead of the Nebraska version, and there’s a big difference in the design. The Nebraska Sower is gingerly holding the edge of his seed pouch in front of him with two fingers, while the Michigan one… well, he has a rougher grip. And in the drawing that Heldt turned in, it’s impossible not to see it as a hideously enlarged scrotum.

Immediately after the design was revealed, Nebraskans on social media started pointing out the problems, and it wasn’t long before governor Pete Rickett stopped the presses on the plate to give the state time to work up a new design more in line with the Sower’s sack.

Although we can certainly respect the wishes of anybody who doesn’t want a guy hoisting huge balls on the back of their car, we can’t help but see this as a missed opportunity for Nebraska. What better way to make your state stand out from its midwestern neighbors than by boasting about the size of your collective balls?