We Need To Save The Peruvian Scrotum Frog 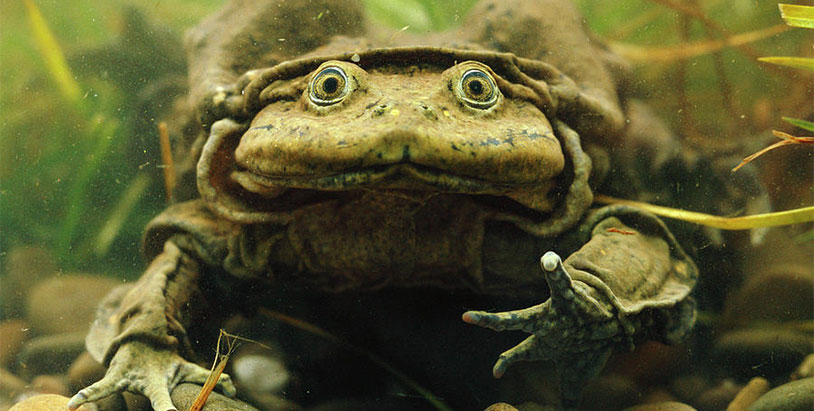 Our primary mission here at the Ball Report is to draw attention to testicles and encourage men to check their balls frequently and detect any early signs of cancer. But that doesn’t mean we can’t have other hobbies, like preserving the South American scrotum frog.

LiveScience has a writeup on the efforts of the Denver Zoo to breed these unusual creatures, more properly known as Lake Titicaca frogs. They only live in that one particular lake on the border between Bolivia and Peru. The frogs have some fascinating evolutionary adaptations that allow them to survive in very cold water.

They earned the nickname “scrotum frog” due to their interesting skin, which clumps up in folds around its body. Those folds allow the amphibian to absorb oxygen from the water. That means they can stay under the surface for longer than other frogs to hide from predators.

Unfortunately for the scrotum frog, one of its greatest predators is mankind, and we’re not fooled so easily. A popular Peruvian folk remedy for impotence is Jugo de Rana, or an entire liquefied Lake Titicaca frog. Locals believe that drinking a blended-up frog mixed with honey, carob, pollen and maca root can increase lung capacity, blood flow and sexual function. Needless to say, there’s no scientific evidence to back this up, but that hasn’t stopped Peruvians from hunting the species almost to extinction.

The team at the Denver Zoo, led by scientist Roberto Elías, has a team on the ground in Peru to educate the natives on how to survive while not wiping out the entire population. Back in Denver, the scrotum frog team has the only specimens in North America. They’re not breeding them yet, but that’s next on the list. Hopefully with enough intervention these bizarre animals will be around for a long, long time.