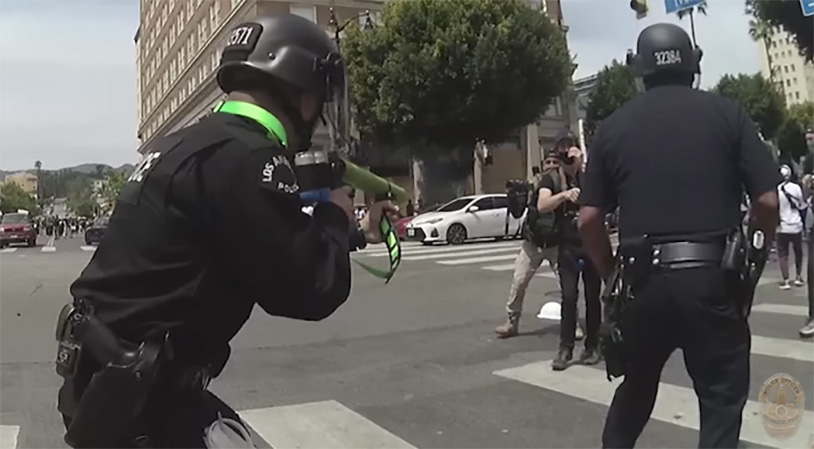 The public upheaval against acts of police violence continues to erupt around the streets of America, as communities rise up to request more oversight, better training, and redirection of police budgets towards non-violent ways to resolve problems. However, the response to those protests has raised concerns of its own. The LAPD just released body cam footage of one of the more outrageous incidents of counter-protester violence thus far, depicting officers discharging a nonlethal projectile directly into a man’s groin at close range.

The incident happened on June 2nd, when a man named Ben Montemayor joined a group protesting in the wake of the death of George Floyd. When his group encountered police, Montemayor claimed that he was physically assaulted for no reason before being shot in the crotch with a 40mm “less lethal” projectile launcher.

The police launched an investigation into the incident, and just released to the public body camera footage from one of the officers on the scene. You can watch the video and decide for yourself whether the LAPD’s response was justified.

We’re not lawyers, but this certainly doesn’t look good for the LAPD. The rules regarding the use of the projectile launcher stipulates that an officer can only discharge it at a suspect who is “violently resisting arrest or poses an immediate threat of violence or physical harm.” Montemayor can’t be seen doing anything of the sort in the video, and when he was shot he was holding his hands passively above his head. Not a good look!