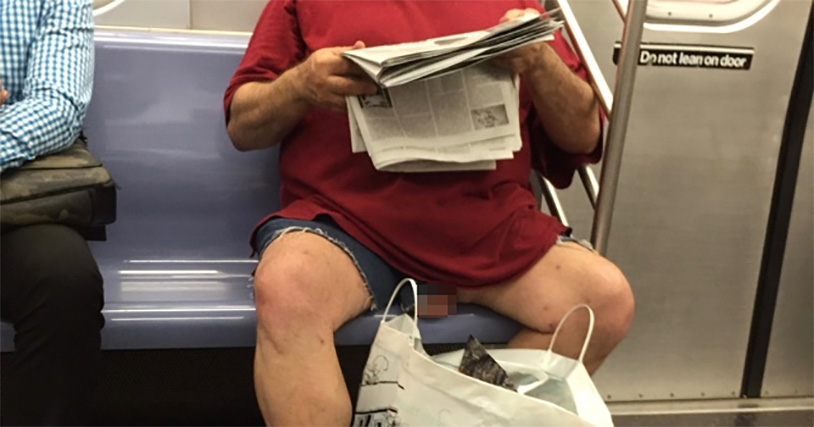 The New York City subway system is like an incubator for all kinds of behavior. There are now signs up in the trains explicitly asking riders to not clip their nails in public, for God’s sake. And a dedicated crew of transit officers patrol the miles and miles of track to make sure that people are obeying the rules.

However, one rider was recently chagrined to report that a case of indecent exposure seemed to not be that big a deal. On Sunday, they snapped a photograph of a gentleman on the 4 train who was wearing a pair of what appeared to be quite deliberately high-cut shorts that exposed his testicles. First off: resting your balls on a subway seat isn’t sanitary for you or other riders, so please don’t do that. Yes, all balls are beautiful, but there’s a time and a place.

When the rider took a snapshot to document it, the man pulled his T-shirt down, so he was obviously aware that his nuts were on display for the world to see. We’d like to give the dude the benefit of the doubt, but how could you leave the house in shorts that skimpy and not know that your nutsack would creep out the bottom.

What do you think? Was this guy’s ball exposure a criminal act, or not? According to the state penal code, wearing clothing deliberately cut to expose your sex organs qualifies as indecent exposure. Subway flashers, grinders, masturbators and other creeps are a consistent issue on the trains, and we think the NYPD should step up enforcement.