Either Pete Rose Or Donald Trump Is Lying About This Baseball 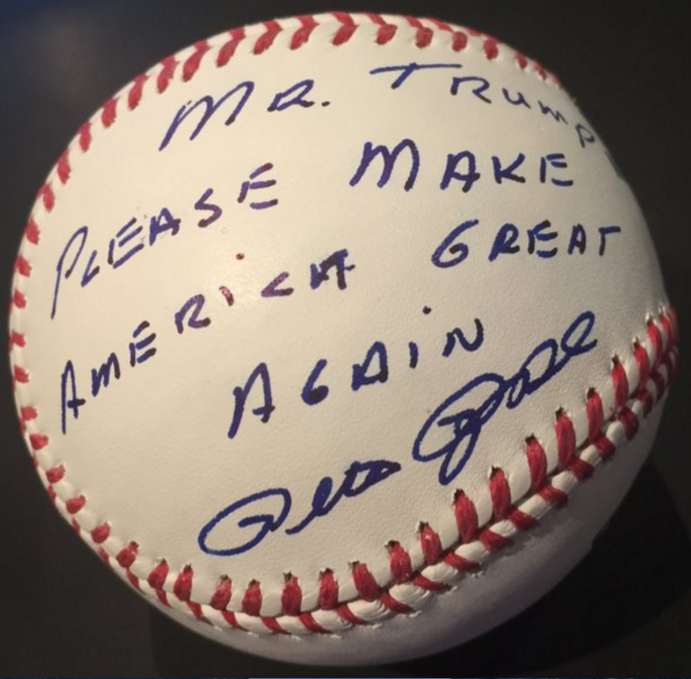 As unbelievable as it may seem, the infamous fibbing gambler Pete Rose and the blustery “non-politician” (and presumptive favorite for the Republican nomination) who was so good at lying he made a business out of it and then lied about that have found themselves at odds about the truth of a matter.

Like most fierce debates these days it has to do with baseball. More specifically, the issue at hand is the provenance of a particular baseball, evidently signed by you-know-who and given to the-other-guy. Or was it?

According to Pete Rose’s attorney’s statement to the media, the baseball has presumably appeared out of thin air.

“Pete has made a point not to ‘endorse’ any particular presidential candidate,” [Ray] Genco wrote.

“Though he respects everyone who works hard for our country — any outlet that misinterpreted a signed baseball for an endorsement was wrong. Pete did not send any candidate a baseball or a note of endorsement. That said, through my discussions with Pete about this cycle, I’ve learned that he believes that who to vote for is a decision each voter should decide for him or herself. Pete knows and has impressed upon me that, above politics, it’s leadership and teamwork [that] make all the difference. Both the left and right are Baseball fans — and it is those institutions and their people that make America exceptional.”

One thing is for certain. Pete Rose is definitely a man who regularly converses with his attorney.

Whether or not Rose (or a Rose-authorized signature surrogate, or an attorney, or whoever) was behind the autographed baseball is, politically-speaking, immaterial. For one, surely no one could work themselves up to caring about what a totally irrelevant baseball player (a would-be Hall of Fame player, but still) thought about the Presidential race. If anything, we might be inclined to go the opposite way of the man with some of the most demonstrably poor decision-making skills in history.

But more importantly, this guy has proven time and time again that he will say anything for attention.