This Pizza Is Served Inside An Enormous Fireball 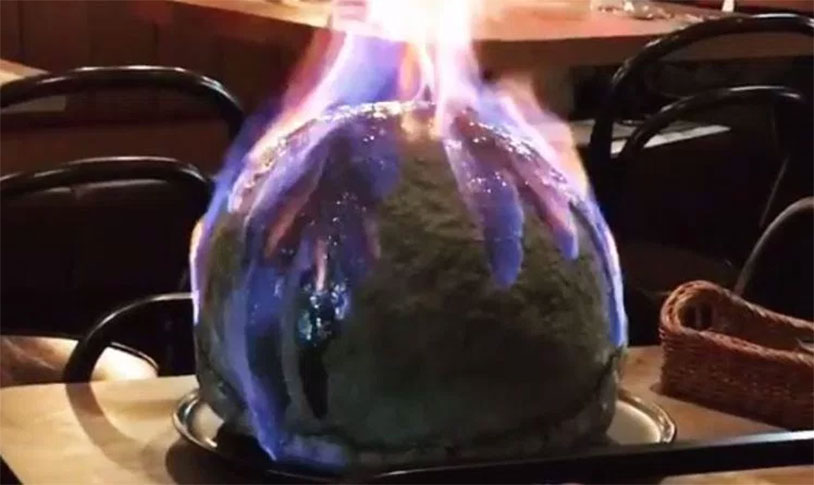 Pizza is one of the world’s most versatile foods. You can top that circle of dough (or rectangle, if you’re Sicilian) with just about anything from classic tomato sauce to chocolate, sausage to rattlesnake. But the pizza being served at South Korean restaurant The Place isn’t like anything we’ve ever seen before, mainly because it involves an enormous ball of fire right at your table.

Metro has the story on the dish, which is so crazy it’s amazing. When you order “The Bomb,” as it’s called, it comes to your table as a giant gray ball, which the server then drizzles oil over and lights with a handheld torch. It burns for a while, and then a pair of shears is brought out to cut through the ball and reveal a perfectly-cooked pizza inside.

How does it work? The gray ball is actually made of pizza dough that’s been tinted with squid ink to give it a unique color. When it’s set afire, it produces a lot of steam inside the hollow cavity, that heats the pizza inside. The base of the pizza is cooked beforehand, so that steam swiftly melts the cheese and heats the toppings. It’s dramatic, but also functional. You don’t eat the doughy shell, apparently, so that’s a little wasteful.

Here’s a video of the process, so you can see the Bomb in action. It takes a few minutes from serving to hit your plates.

What do you think? Would you eat a pizza pie cooked inside a giant squid ink ball, or does steamy cheese sound gross to you? What was wrong with the traditional Italian way to make pizza, in a hot brick oven? We’ve got some serious reservations about this bold new take on one of our favorite foods, but we’ll reserve judgement until we try it.