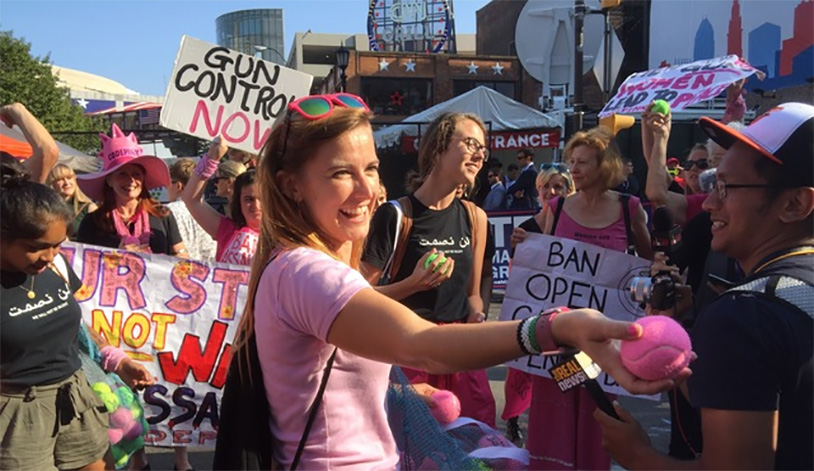 We don’t talk a lot about politics here, for many reasons, but it’s undeniable that the Republican National Convention has been… interesting. The past few days at the RNC saw a candidate compared to Satan himself, a near-riot on the floor and some seriously weird speeches. But one fascinating ball-related thing happened right outside.

In the month leading up to the convention, the Cleveland Police Department issued a list of things that it was forbidden to bring to the area surrounding the Quicken Loans Arena. Surprisingly, that list didn’t include “guns.” It did, however, include tape, rope, stepstools… and tennis balls. The police had actually requested Governor Kasich temporarily suspend open carry laws around the RNC, but he refused.

That seemed deeply weird to activist group Code Pink, who are protesting all around the RNC this week (including inside the building), so they set up an action to draw attention to it. On Tuesday, they took 500 tennis balls donated by the Brady Campaign against gun violence and lined up with them in front of the doors.

Naturally, the police swept in and forcefully removed all of the balls from the location. According to Code Pink representative Medea Benjamin, one officer told her “tennis balls can be very dangerous, because you can open them up and put something inside of them.” Guns can also be opened up and bullets can be put inside of them, but that doesn’t seem to bother anyone.

What do you think? Was the presence of a bunch of ladies with tennis balls worthy of police intervention at the RNC, or should they loosen up a little bit?