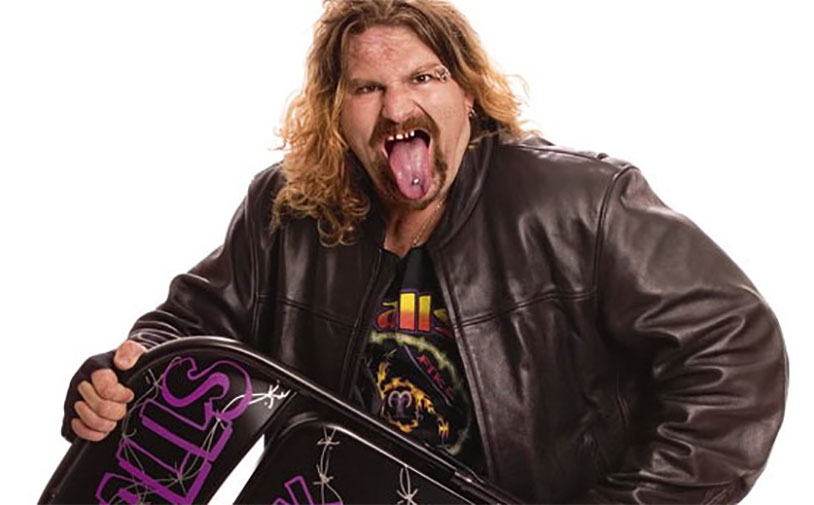 When we started this site, one of the things on our bucket list was to secure an interview with ECW original and hardcore wrestling legend Balls Mahoney. Alas, that will never be, as he died on Monday at the age of 44.

Mahoney, real name Jonathan Rechner, was born in New Jersey and started his wrestling training in his teens at the notorious Monster Factory. In 1994, he signed with Smokey Mountain Wrestling to portray the character “Boo Bradley Jr,” a villainous spoof on the slow-witted character from To Kill A Mockingbird. He would briefly work for the WWF as “Xanta Claus,” an evil Kris Kringle who delivered beatings, not presents, but failed to get over and was released.

In 1997, Rechner signed with the nascent Extreme Championship Wrestling and was given the gimmick that would make him a star. Balls Mahoney was a chair-swinging lunatic who had no respect for the rules, and the bloodthirsty ECW fans ate it up like crazy. When Mahoney charged to the ring accompanied by AC/DC’s epic “Big Balls,” you knew that somebody was going to be laid out.

Mahoney teamed with Axl Rotten for tag team action, as well as feuding with the Dudleyz and Masato Tanaka. When the company folded in 2001, he moved on to the independent circuit. After WWE brought back the brand in 2005, he was once again on the roster, feuding with Kevin Thorn and teasing a romantic angle with Kelly Kelly. That would be Mahoney’s last shot at stardom, and he was released in 2008.

He continued to ply his trade on the independent circuit up to his passing, working for Juggalo Championship Wrestling and several other promotions. The cause of Balls Mahoney’s death is still unknown, but the world has lost a true character who brandished a huge pair of balls. Here’s Balls facing off with Tommy Dreamer in an Extreme Rules match to remember him by.