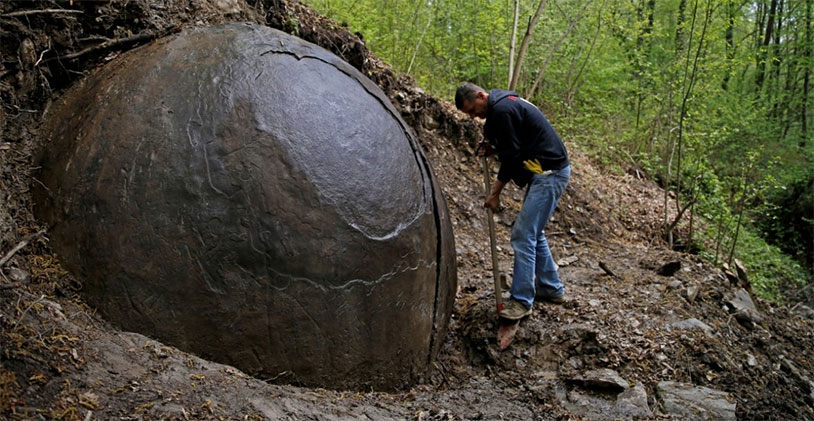 If you’ve ever met an archaeologist, you know that they’re not much like Indiana Jones, the famous adventurer portrayed by Harrison Ford in a quartet of movies and counting. They spend most of their time either carefully excavating artifacts or writing papers, not whipping Nazis or eating monkey brains.

Not all archaeologists, though.

The International Business Times has a story about Semir Osmanagich, a world-traveling scientist who is referred to by his peers as the “Bosnian Indiana Jones.” Osmanagich got that title from his many exploits that other archaeologists consider over-the-top, like claiming that the Visoko Valley in his home country was once home to a string of ancient pyramids.

Osmanagich’s latest find, though, is tougher to dismiss. In March, his team was exploring north of the town of Zavidovići when they happened upon something very unusual – a massive stone sphere in the Earth, about nine feet in diameter and with an estimated weight of 60 tons. If it’s a legitimate artifact, it would easily qualify as the largest man-made stone sphere in all of Europe.

The crusading scientist believes that the existence of this ball is just more ammunition for his pyramid theory – that an incredibly advanced civilization occupied what is now Bosnia 12,000 years ago. Zavidovići says that there also used to be many more of these huge orbs scattered around the countryside, but superstitious villagers destroyed most of them because they believed that they had gold inside.

Not everybody is buying his explanation for the origin of the spheres. Geologist Mandy Edwards offered an alternate possibility: that the sphere is a natural construction formed by the process of concretion, wherein sediment is glued together by the precipitation of natural mineral cement. Whatever the cause, we can all agree: that’s a really huge ball.