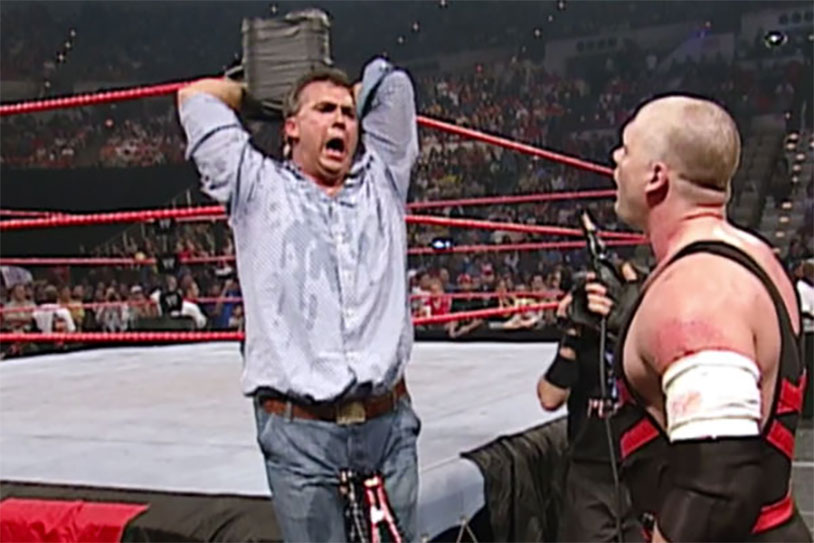 Before Glenn Jacobs became the mayor of Knox County, Tennessee he was the masked wrestler Kane, a sadistic behemoth who loved to inflict pain on his foes. It’s sort of amazing that he’s managed to have a political career with all the baggage he brings to the table, and a YouTube video popped up reminding us how absolutely bizarre his in-ring activities were.

The incident in question dates from 2003, when the big red machine had lost his mask, revealing that his face wasn’t horribly disfigured like we’d been told all these years – instead his scars were psychological. Anyways, he brutally delivered a Tombstone Piledriver to WWE executive Linda McMahon, forcing her son Shane to try and get revenge against the towering monster. Never a smart idea.

Kane got the better of Shane at nearly every turn, but most notably was on September 1, when he attacked him in the ring and tied him to one of the posts. Ready to deliver the pain, Kane grabbed a car battery and jumper cables and used them to deliver high voltage to the guy’s nutsack (in kayfabe, of course, because wrestling is fake).

Shane went on to become the father to three sons, so it looks like the electrocution of his balls wasn’t a huge deal. You can read more about the whole sordid incident at WhatCulture.