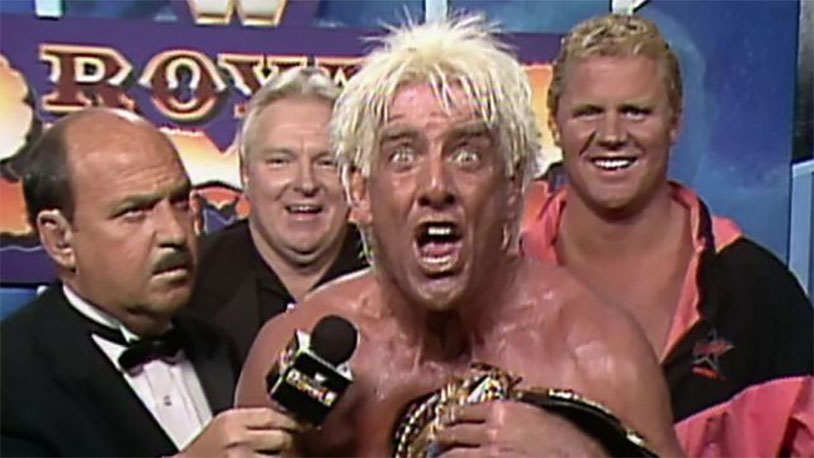 One of the WWF’s biggest pay-per-views is tonight. The Royal Rumble pits thirty sports entertainers against each other in a single ring where the only way to lose is being thrown over the top rope. Lots of sites have been doing retrospectives on the event, but for our money the best Rumble of all time came back in 1992 when the Nature Boy Ric Flair took home both the win and the WWF Championship.

The ’92 rumble has some interesting parallels with this year’s event, as it’s the first time since then that the World Heavyweight Title has been on the line. The champion going in is Roman Reigns, but if he gets eliminated, the last man standing will take the belt.

When Flair took it almost 25 years ago, he did it in classic Flair fashion: by bending the rules in as many ways as he humanly could. The self-proclaimed “dirtiest player in the game” is notorious for cheap shots, gang-ups and other nefarious paths to victory, and even today as manager for his daughter Charlotte (who also has a match tonight, against Becky Lynch) he still does it.

So why are we writing about pro wrestling on the Ball Report? Because one of Flair’s trademark tactics was in full effect in the 1992 Royal Rumble. The Nature Boy is famous for having one of the nastiest ball shots in all of professional wrestling, and after his entrance to the Rumble at #3, he hits a sick low blow on Davey Boy Smith. Later on in the match, Flair would also give a shot to the junk of “Hacksaw” Jim Duggan and finally a third to the Undertaker. That has to be a record.

So what do you think? Who’s going to win tonight’s Royal Rumble, and how many nut shots will be in the match?