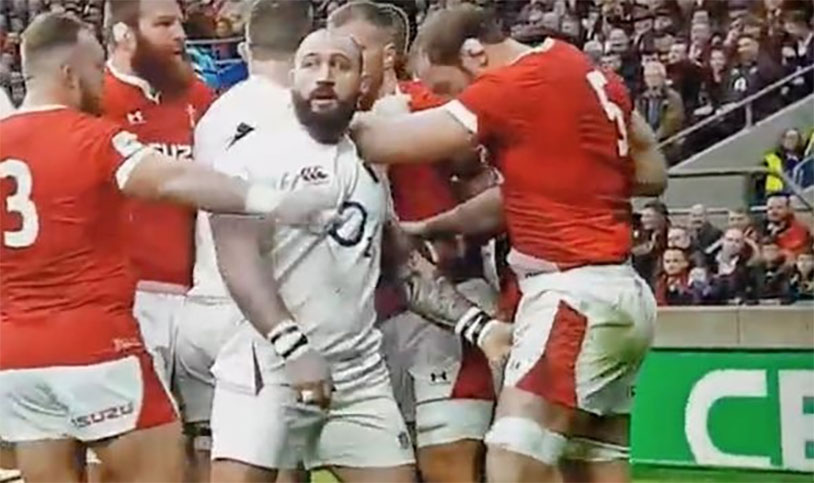 Rugby is a pretty rough sport, but there are still some things you can’t get away with on the field. One player for England’s national team found that out the hard way, as gripping an opposing player’s ballsack could result in him being benched for three straight months.

England was playing Wales in the annual Six Nations game when a huge fracas between both teams broke out just about ten minutes in. Both sides entered the scrum, and in the chaos English star Joe Marler blatantly reached in and squeezed the crotch of Welsh player Alun Wyn Jones. The whole thing was caught on camera, with Jones’s shocked face telling the whole story.

After the game, Jones spoke out about the incident, complaining that Marler was not penalized during the scrum. He said “Joe is a good bloke. . . but there is all the footage that has been shown and a lot of supporters have seen what has happened. I looked across at the touch judge and he obviously didn’t see anything. But we talk a lot about TMOs and what they review, so it was frustrating this wasn’t dealt with there.”

Law 10 of the World Rugby League rulebook contains the language about gripping, twisting or squeezing balls, as well as the penalty. If Marler gets twelve weeks, he’ll get off lucky, as the maximum suspension period is four entire years.

England ended up taking the game 33-30, but Marler wasn’t the only player penalized. Manu Tuilagi delivered a high tackle on winger George North that could see him out of the game for six weeks.