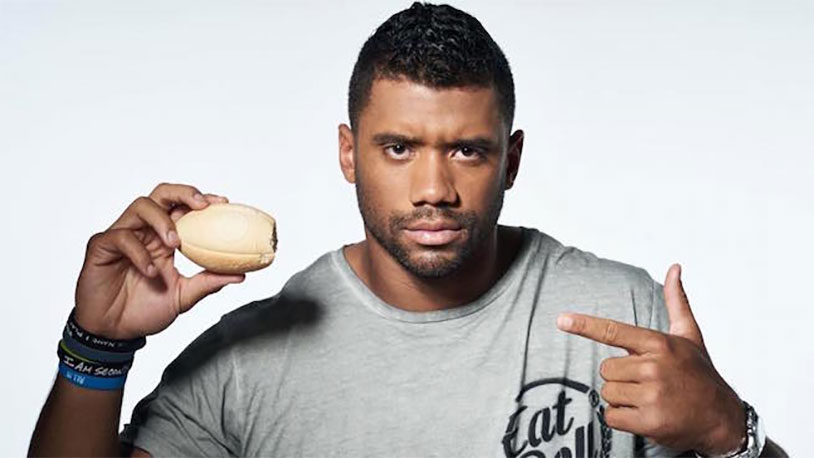 How much do you think we relish getting to write headlines like that? QB Russell Wilson was one of the key players behind the Seattle Seahawks’ resurgence as a football powerhouse, and naturally with great fame comes great endorsement deals. Last week, Wilson announced he was teaming up with a food company called “Eat The Ball” and a red telephone started ringing in our secret headquarters.

So what is “Eat The Ball” exactly? They’re an Austrian company who wants to reinvent the dough business with a new kind of bread. Made with just a handful of ingredients and no added chemicals, the kicker – no pun intended – is the shape. Every loaf is formed in the style of a soccer ball, football or globe, complete with continents.

Wilson hooked up with them at a fundraiser at the Bellevue’s Boys and Girls Club to serve the first American kids the chance to eat the balls. It seemed to go pretty well, as you can see from the video below.

The Hawks QB is well-known for his inspirational quotes, so naturally he had something to say about the positive aspects of his new bread buddies. “It’s not just athletic balls … it’s also for an education purpose. There’s an Earth ball. So it has all the seven continents. Imagine a kid going up to the line, he’s grabbing that piece of bread, rather than just grabbing a normal piece of bread, now he actually grabs something that can trigger his mind, to think about the continents of the world, and what cities and where, and where they want to go.”

Sure, Russ. Kids of the world are going to look at this goofy bread ball and fantasize about a life of world travel. Dude, they’re just into Minecraft now, how is bread going to compete with that? Let us know when they make bread cubes.