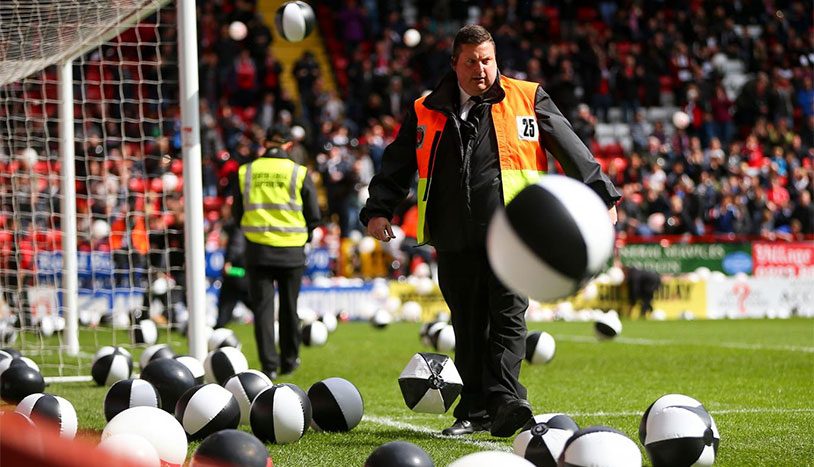 If there’s one lesson to learn in this world, it’s “don’t screw with soccer fans.” They’re notoriously loyal to their teams and ready to explode over even the smallest slight. So when the new ownership of London club Charlton FC had the team relegated to League 1 this season, the fans showed their displeasure by ruining a championship game.

Here’s the backstory: Charlton was bought by billionaire Belgian Roland Duchatelet in 2014 and immediately fans started to revolt against his decisions. After a controversial statement was posted on the team’s website accusing some fans of “wanting the club to fail,” things just got worse. An organization called “Coalition Against Roland Duchâtelet” boasts hundreds of members, and they were out in force at Saturday’s game.

Before the match against Brighton kicked off, a protest march of some 5000 people surrounded the stadium, according to The Independent. Once the soccer game started, the same fans would bring it screeching to a halt by throwing hundreds of inflatable beach balls and balloons onto the pitch.

The referee had to stop the game in progress while the field was being cleared, and it was quite a surreal spectacle. Whatever point the upset fans had to make, they certainly made it. Duchatelet’s recruiting strategies and hiring decisions have been called into question in recent months, and fans aren’t going to sit still for it any longer. Sure, every armchair manager thinks they can run a soccer club, but Charlton’s performance isn’t a strong testament for Duchatelet’s decision-making skills.

Charlton went on to lose the game 3-1, and team manager Jose Riga admits that fan behavior had a big part in the team’s performance. We feel bad for the poor soccer players who have to go out and do their best in front of a hostile crowd, but what solutions can be had?