Does This Spider-Man Toy Have An Enormous Nutsack? 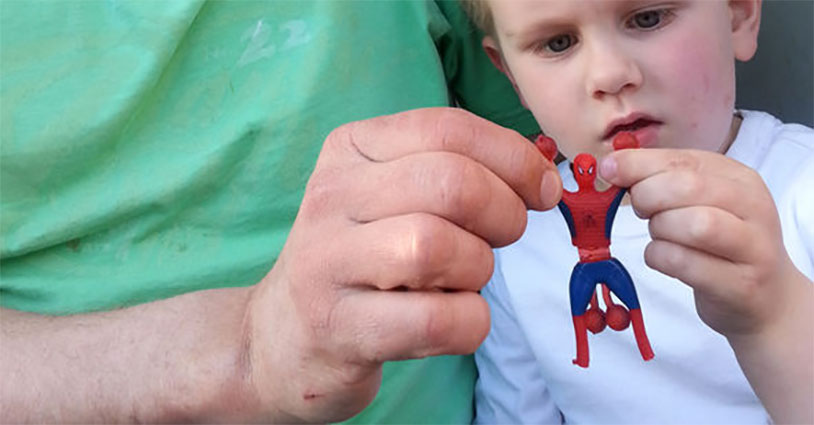 Spider-Man, Spider-Man, does whatever a spider can. Is he strong? Listen, bub. He’s got radioactive blood. And, apparently, a scrotum that would make a bull moose proud.

The Daily Express has a ridiculous story about a 42 year old father of two named Chris Herbert and his son Freddie, who is a huge fan of Marvel’s wall-crawling hero.

At the grocery store, Freddie wouldn’t shut up about the latest issue of Marvel’s Spider-Man magazine (comics are sold differently over in England, so you know) – not only did it contain illustrated adventures of Peter Parker pummeling his foes and dealing with his often dramatic personal life, it also came with a free toy!

Yeah. About that toy. When Herbert and his kid got home, they couldn’t wait to play with the plastic Spider-Man, who was advertised to be able to crawl down walls, much in the tradition of the classic Wacky Wall-Walker. However, the underpaid intern who designed the thing didn’t put too much thought into how it looked, because this hero’s got balls.

The Spider-Man toy features two sticky nubbins on its hands, as well as a second pair attached to his back by tethers. When Spidey is standing up, though, that second pair hangs down between his legs like… well, you know what they hang like. The effect is uncanny, and somewhat disturbing.

Herbert wouldn’t have raised a fuss if a big pair of balls was the only thing wrong with his son’s toy, but evern worse, it didn’t work as advertised! What good is a Spider-Man with a huge set of gonads if he can’t even cling to walls? Not much good at all, in our opinion. The toy has since been renamed “Cojones-man” and is resting on Herbert’s mantel, waiting for a crime to spring into action.