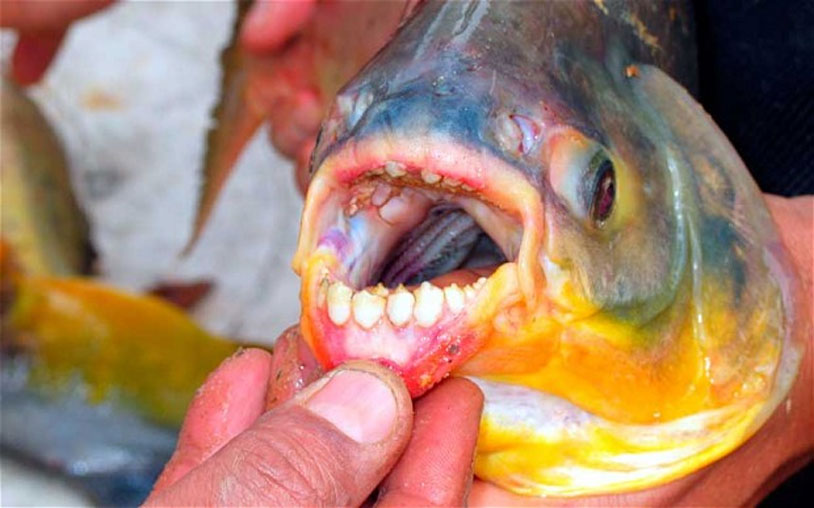 Summer is here and, if you’re anything like us, you can’t wait to get out of the heat and into the water. If you live in New Jersey, though, you might want to think twice before doing any fresh-water swimming.

New Jersey’s 6ABC is reporting that a man in South Jersey pulled a rare South American pacu fish out of Swedes Lake over the weekend.

That might not seem like such a big deal until you do a little research into exactly what the pacu fish is. This relative of the piranha is notable for its full mouth of teeth, which look disturbingly like those of a human. Even more disturbing is what it does with those teeth: eat nuts. In its natural habitat, the pacu uses their mighty jaws to crack nuts that fall off of trees into the water and extract the high-protein nutmeat inside.

This, quite naturally, led to panic that the fish would get confused by the lack of tree nuts in cold Northern waters and try to eat a different kind of nut instead – the ones hanging from your groin. While scientists have tried to quell panic by stating that a ballsack attack from the pacu fish is quite unlikely, there is a report from Papua New Guinea that states that two men died after having their nuts chomped by a pacu in 2011.

New Jersey isn’t the only place that pacu have been found – fishermen have pulled them out in Denmark and Illinois as well. The most likely explanation is that an aquarium owner bought them and then released them into local waterways. They don’t pose a significant threat to marine ecosystems and are unlikely to breed, which is good. But if you value your nuts (and if you’re reading this site, you probably do), you might want to stick to the pool this summer.