The Funniest Fireworks To The Balls Fails 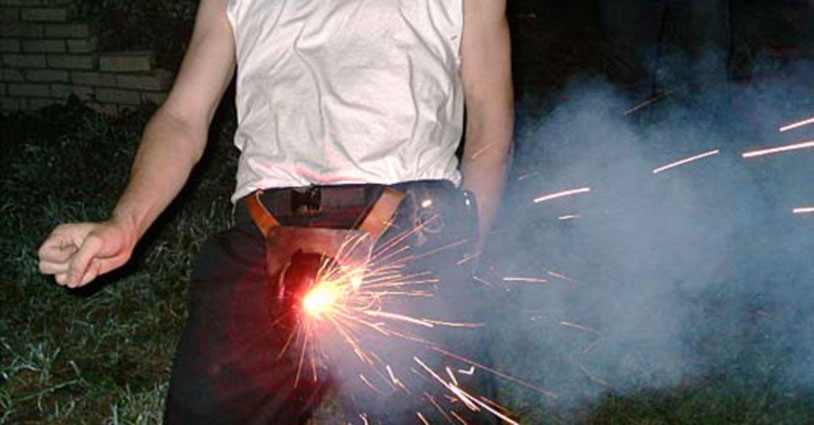 Don’t try this at home. Well, actually, after you watch these videos you shouldn’t have any desire to try this at home. The 4th of July means fireworks, and fireworks means people getting tanked and doing dumb things with fireworks. Since this is the Ball Report, we’re going to focus on a subset of fireworks fails in which people got their balls involved.

One of the classic “fireworks to the balls” mistakes comes when some young dude holds a launcher up to his groin so it looks like he’s blasting shots of hot fire from his dingus. These things don’t always go where you think they’re going to, as the poor schmoe in this video quickly learns.

This might be the most intensely choreographed fireworks to the balls video on here, in which a suburban metalhead straddles two cars, gets a bottle rocket blasted at his ding-dong and then… well, to describe it would be spoiling it. Let’s just say that magic happens.

You might not want to watch this one at work, as it contains enough swearing to get you fired from anywhere but a pirate ship. These dudes put together a contraption that consists of a cardboard tube and an explosive device, probably thinking that the force of the blast will send the firework rocketing out into the sky. Unfortunately for the poor schlub holding the tube, he doesn’t point it the right way and agony ensues.

The bigger the bang, the bigger the ball pain. I think Copernicus said that. This dum-dum decides to take one of those big tube mortar fireworks and light it over his groin while he reclines, and the resultant blowback catches his shorts on fire in a very negative way.

Here’s another mortar shot to the nuts, this one taken by people who look at least moderately sober. These shells can go as high as 200 feet into the air, so there’s a lot of propulsive force behind them. Enough to burn right through this goon’s track pants at the very least.

What better way to build friendship and camaraderie than to all blast off fireworks from your crotches together on the 4th of July? Unfortunately for the last guy to go in this bizarre little display, his rocket got a little mesed up on the launching pad, engulfing his groin in a huge explosion.