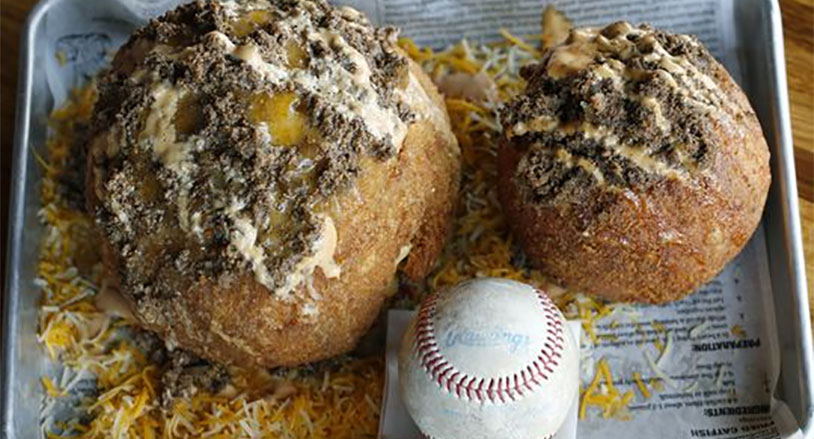 If you’ve spent any time in upstate New York around the Rochester area, you’ve probably heard of Nick Tahou Hots and their trademark dish the “garbage plate.” Now an enterprising competitor has come up with the next evolution of the concept – the Garbage Ball. Sound appetizing? Read on.

Here’s a little history on the original Garbage Plate. It’s basically exactly what it sounds like: a little bit of everything the restaurant serves, all jammed up on a single plate. At Nick Tahou, that’s hamburger, two kinds of hot dog, chicken, fried ham, haddock, grilled cheese, eggs, French fries, baked beans – you get the idea. It sounds repulsive but Rochester natives go nuts for the stuff.

The Garbage Ball is the invention of Jerry Gallipeau, the owner of 585 Rockin Burger Bar. He has a reputation for goofing around with food to create whimsical and ridiculous dishes, and the temptation to tackle the legendary garbage plate was too much for him to resist. Taking a traditional arancini – the fried Italian rice balls that are stuffed with a variety of fillings – he swapped out the rice and created a massive ball of ground beef, macaroni salad, French fries and shredded cheese.

Gallipeau then breaded the orb with panko, deep-fried it and served it with a meat-based sauce. Sure, it’s missing some of the trademark ingredients of a pure Garbage Plate – no fish, thanks – but the general experience is the same. He’s brought them back on the menu for a limited time and the customer response has been phenomenal. They’re now served on special on Wednesday nights for $9.95 a pop until supply runs out.

Read more at the Democrat and Chronicle. What do you think? Does the Garbage Ball strike your fancy as something you’d want to chow down on?