The Los Angeles Reservoir Is Getting 20,000 Black Balls 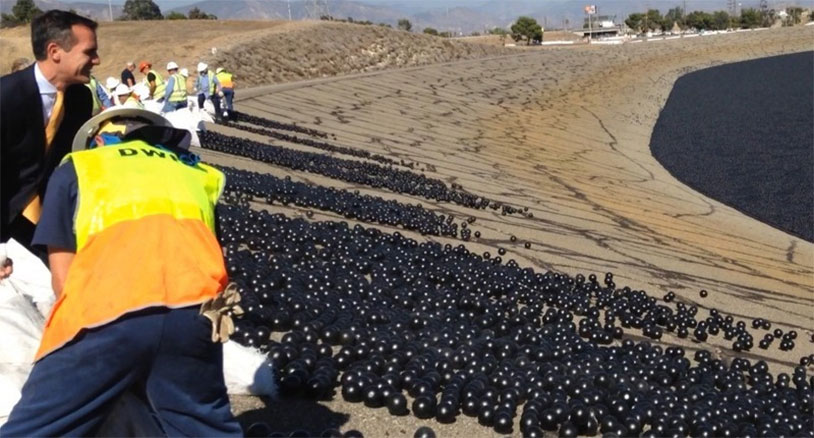 Water is a hot topic in California right now, as the Golden State is dealing with a drought that threatens agriculture and many other industries. The mayor of Los Angeles is taking some interesting steps to preserve that city’s drinking water, and one of them involves 20,000 big black balls.

They’re called “shade balls,” and the scientific principle behind them is simple. When released into a body of water, they float on the surface and help protect the water from sunlight, birds and other forms of pollution. Too much sunlight can cause algae in water to multiply at an accelerated rate, causing what are called “algal blooms.” Often colloquially referred to as “red tide,” they can make water unsafe for drinking, which would be a very bad thing.

Their most useful function, however, is preventing evaporation. When heat transforms surface water to vapor, it typically dissipates in the atmosphere. With shade balls in place, however, that vapor condenses on their surface and then, when temperatures cool, it drips back into the reservoir. The scientists in charge of the L.A. project predict that they could save the county 300 million gallons a year.

Here’s a video of shade balls being released into the Las Vergenes reservoir, elsewhere in California.

The Los Angeles Reservoir has been having shade balls – which are made locally for 39 cents a pop – added to it steadily over the course of the past year, joining three other bodies of water in the area which are already covered. The last balls were dropped in over the weekend, completely covering the surface.