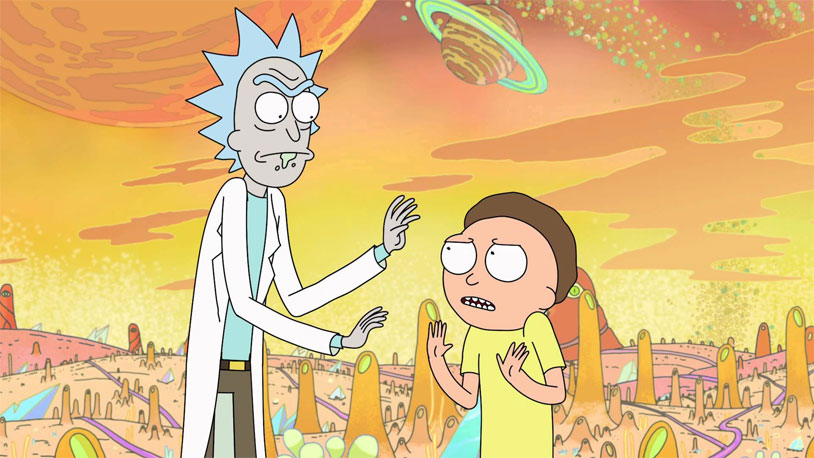 Are you watching Rick and Morty on Cartoon Network? If you’re not, fix that immediately. The show, created by Community‘s Dan Harmon and Justin Roiland, takes the Doc Brown / Marty McFly relationship from Back To The Future and transforms it into something so demented that it boggles the mind. We haven’t had a reason to write about it until now, but last Sunday’s season premiere finally brought it into our wheelhouse: testicle-faced cops.

Let’s bring you up to speed: last season ended with the duo throwing a giant party that wrecked the house and Morty’s parents about to come home to see the carnage. With just moments to spare, Rick froze time to give the duo and Summer an opportunity to clean everything up.

Six months later, we pick up with Rick turning his time crystal off to bring the trio back into the mainstream timeline. Unfortunately, spending so long outside of the flow of time has done some serious damage to the fabric of the universe. That sends them on an adventure through quantum possibility space that splits the screen into multiple timelines all running concurrently.

This is an incredibly ambitious thing for an animated series to do, and they pull it off with incredible style. Even though there’s so much happening at the same time, the pacing, timing and sound mixing is flawless. Harmon is no stranger to pushing TV to its limits, and he might just top himself with this one.

“But what about the balls?” I hear you ask. Calm down, true believers: Keegan-Michael Key and Jordan Peele show up for a riff on the cops they played in Fargo as an interdimensional law enforcement duo, only with wrinkled nutsacks for faces.

Here’s the trailer for Season 2. We have a feeling those cops aren’t going to be the only ball-themed guests we see before the whole thing’s over.