The Story Of Scrotie, The College Sports Mascot Who Was A Dick And Balls 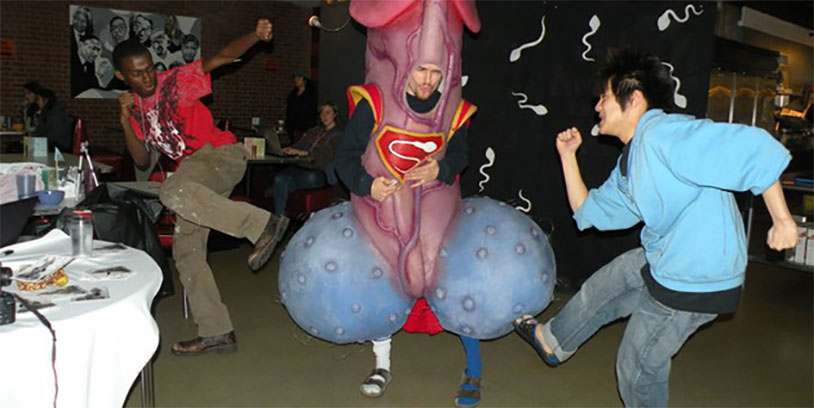 College sports are big business, with many schools putting as much into them as they do into academics. But the Rhode Island School of Design in Providence – abbreviated “RISD” – isn’t like most schools. Their sports teams are generally ironic jokes, and their mascot is quite possibly the weirdest one in the world.

Meet Scrotie. The anthropomorphic penis and testicles made his debut at a hockey game in 2001 when an enterprising student crafted a costume out of scrap material they had laying around. RISD’s team, the Nads, was shocked to discover that they suddenly had a mascot cheering them on from the sidelines, but it wasn’t long before Scrotie was a part of campus life, also cheering on the basketball team (named the Balls, because why not).

If you’re shocked that suck a prestigious art school would embrace something so lowbrow, it’s worth noting that RISD is the alma mater of Family Guy creator Seth MacFarlane. The campus is no stranger to dirty jokes and wacky behavior.

The original Scrotie costume managed to hang on for a staggering eight years according to this article, but the wear and tear became too much and the university had to retire the mascot. You can see him doing his work at a 2008 Nads game in this video.

Don’t fret, though: the university realized what a vital part of school spirit Scrotie was and enlisted a group of students to create a new outfit that would bring Scrotie back to vivid life. Designed by senior Sean Devare, the new Scrotie is brightly colored and features a more ergonomic design that lets the wearer actually sit down, along with adjustable straps to fit people of all sizes. Scrotie’s trademark red cape was enlarged and he was given a sperm emblem on his chest, just in case anybody didn’t realize what they were looking at.

With his new outfit, it’s a safe bet that Scrotie will be making opposing teams uncomfortable at RISD for a good long time.