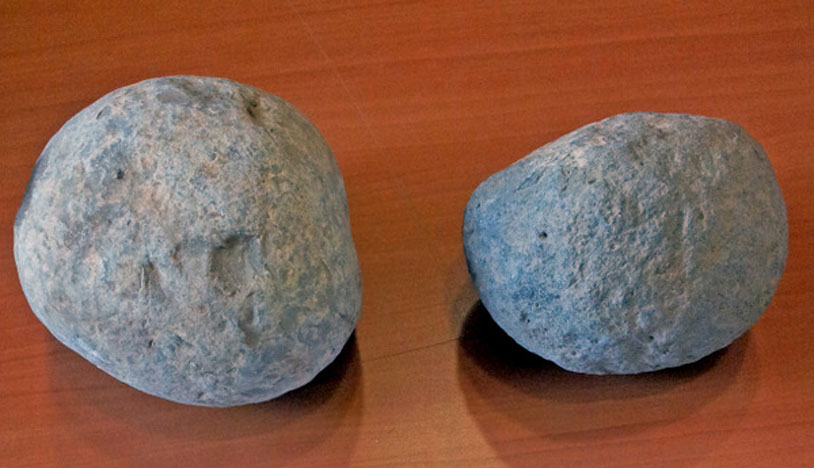 We typically like to keep it positive around here and write about the many different joys that a pair of balls bring you. But sometimes balls… come with a curse. Read on to experience a story of 2,000 year old balls that made a criminal renounce his law-breaking ways.

The Middle East is one of the richest archaeological areas on Earth, with past civilizations crossing through for thousands of years. And, naturally, the antiquities that come out of those digs can be extremely valuable. Tomb robbers have been swiping relics from the soil almost as long as they have been buried, but when a thief grabbed a pair of Roman ballista balls from a dig outside of the town of Gamla in 1995 he bit off more than he could chew.

Ballista balls are about the size of a child’s fist and were used as slingshot ammunition, able to put the hurt on a target from a solid distance. The balls went missing after they were put in storage, so unless a researcher looked for them in specific they would have no idea that they were gone in the first place – that is, until they were returned.

And here’s where the story gets weird. A few days ago, the Israel Antiquities Authority received a parcel with the two balls and a note that read “These are two Roman ballista balls from Gamla, from a residential quarter at the foot of the summit. I stole them in July 1995, and since then they have brought me nothing but trouble. Please, do not steal antiquities!”

Because we don’t know anything about the thief – and probably never will – the curse of the 2,000 year old balls may remain a mystery. What kind of trouble could a pair of rocks bring a person? One thing’s for sure: we don’t want to find out.