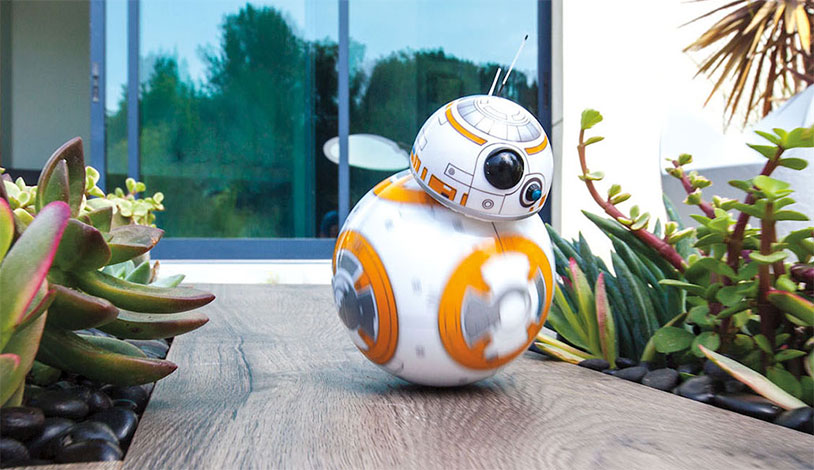 So last week saw Force Friday, when the first toys and tie-in items for the new Star Wars movie went on sale around the country and just as quickly sold out. People reported in stories of retailers being stripped to the bones just minutes after closing, with Funko Pops being especially decimated.

But there’s one Star Wars toy that is currently standing head and shoulders above the rest, despite not having any shoulders. It’s BB-8, a robotic replica of the rolling soccer ball-esque droid from the preview, and everybody wants it. Created by Sphero, a high-tech toy company, the home version works just like the one you saw on-screen, with a rotating ball capped by a magnetically-attached head that lets the device move in any direction.

You control its movements with a smartphone app, and the little bugger can also respond to your voice. In addition to its awesome locomotive abilities, you can use it to record and project “holographic” messages, R2-D2 style, as well as assign patrol routes or just let the little guy wander around on its own.

It’s virtually impossible to find a BB-8 on store shelves right now – shoppers picked them up within minutes at every store lucky enough to get a shipment. We’d expect that trend to continue until Christmas at least, so if you have a Jedi in the family that wants one, don’t wait until the last minute.

BB-8 retails for a cool $149, but that’s pretty reasonable for the droid you’ve always been looking for.

BB-8 is currently out of stock, so the best way to get ahold of one is to pre-order it from Sphero, the manufacturer, at their site.