This Hockey Player Survived Testicular Cancer And A Tornado 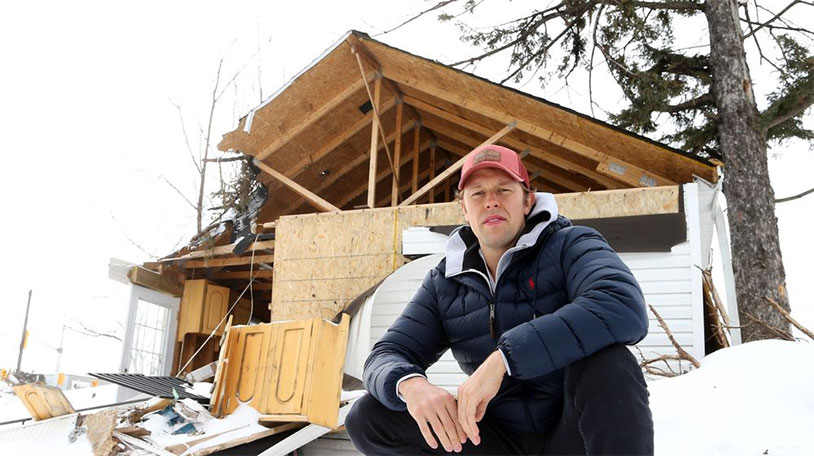 Surviving testicular cancer once is a blessing. Twice is a miracle. But throw a tornado into the mix and you might start asking questions about your place in the universe. Let’s check in with former pro hockey player Chris Kushneriuk and hear his story.

The hard-charging player had a career in the minors, starting 2011 signed with ECHL’s Wheeling Nailers before he was traded to the Bakersfield Condors. But midway through the season, he noticed that the energy he normally brought to the ice was flagging and he checked into a hospital in Ottawa for an examination.

After multiple doctors looked him over and ordered a CT scan, he got the bad news: stage 4 testicular cancer. Surgery was scheduled to remove his ball the next day and he was rapidly put on chemotherapy, as well as receiving a pair of bone marrow transplants. The cancer had spread, so he needed to have portions of his liver, kidneys, gall bladder and lymph nodes removed as well. Just a rough time all around, but he survived, and even returned to the ice.

In 2018, though, at his five year checkup, doctors found another tumor in his right lung – some stray cells that hadn’t been caught by the chemo. Another operation took care of them, but he needs to always be alert for any unusual sensations that could indicate it returned.

And, finally, in September of last year a tornado ripped through his Ottawa home, tearing it in half and forcing him to move. Through it all, though, the player remains positive:

“The house got damaged, our stuff got damaged, but everybody’s OK, everything will be made OK. The loss of material goods is really nothing. It’s been tough, but I’m fortunate to be able to see the light at the end of the tunnel. In some regards, it’s been somewhat of a good thing. The perspective the challenges have given me is you can’t spend all your time just working. You have to do things you love. This whole experience has shown me what things in life really matter.”

Read more at the Ottawa Sun.